Join our newsletter to be the first to hear our latest news! Learn More
Home / Reviews / Review: D is for Deadbeat by Sue Grafton 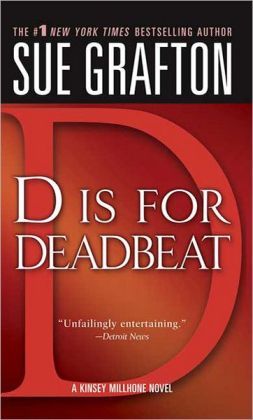 D is for Deadbeat

“I was so in tune to this book that I actually found myself yelling at the people around me to shut up just so I wouldn’t miss a single detail of the big reveal.”
~ Under the Covers

This month my plan is to read as much Mysteries as I can leading up to Halloween so of course I had to go back to one of my most favorite Mysteries series, the Kinsey Millhone series (aka the Alphabet Mysteries series).

I always say this but if you aren’t reading these books, then you’re missing out on an amazing heroine and some great crime novels. When I read about Kinsey Millhone, I feel like I’m reading about a part of myself. She has that drive similar to me where when she’s got her mind decided on something, she does whatever it takes to get it. So I find that I can relate to Kinsey’s character a whole lot. When you see a part of yourself reflected in a character, it’s easy to fall into their stories.

For this case, Kinsey is hired to deliver a check to a fifteen year old boy. Sounds simple enough, right? It’s not when her own check bounces and she tries to track down the guy who hired her that she realizes things are more hairier than they first seem. I listened to this one in audio again and I have to say, the narrator does a fantastic job of doing all the various voices. In this book there’s a whole bunch of different personalities but she does such good job, you can totally appreciate the effort she’s put in.

I was so in tune to this book that I actually found myself yelling at the people around me to shut up just so I wouldn’t miss a single detail of the big reveal. It got intense right around the end and that’s what makes Sue Grafton’s books so amazing. They are timeless and also highly engaging at the same time. I’m already dying to jump into the next book of the series!

I hear nothing but amazing things about this series …

It truly is as amazing as everyone says!

Shame on me for never having read these! This is a great review. Thank you, Annie! I am rectifying my oversight asap.

If you like Mysteries, then you’re going to love this series. Kinsey is definitely one of my top fave heroines of all time!

Thanks for the review, I’ve been glomming older new to me series recently.