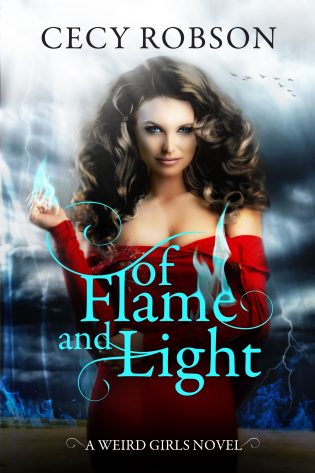 Of Flame and Light
by Cecy Robson

“Cecy Robson created this amazing world full of characters that will make you laugh, love and cheer for the sisters that have always been called weird.”
~ Under the Covers

Of Flame and Light is the 7th installment of the Weird Sisters series and the 2nd book of Taran Wird’s story. If you’re new to the series, these books follow the stories of sisters who were cursed to kill them but instead, each receiving unique powers. The first five books focused on Celia and now Taran’s story. Cecy Robson created this amazing world full of characters that will make you laugh, love and cheer for the sisters that have always been called weird. Not to mention shifters that will knock your socks off.

Taran has been to hell and back and now she has to regain control of everything she has lost. Her powers are out of whack, her arm is still not recovered fully and losing her the love of her life to another is taking a big toll. One of the hardest thing for her to do is to reduce herself and work with the witches and learn their ways hoping to get control of her magic. The worse part is she has to endure this under the care of the very witch who wants Gemini for herself.

Oh boy, it was hard to see Taran having to control her feelings of her situation. She has always been a bomb waiting to explode. She made me laugh but often times, I wasn’t sure how to feel about her temper. I felt bad for her especially having Gemini see her at this low state. It gets bad before she gets a handle on things and I mostly held my breath for it. But Taran is a Wird Sister and she pulls through in a very big way.

It was nice to see this story in Taran’s POV. Not only to her her story but to see the backdrop in her eyes, her thoughts. Seeing Celia and Aric’s story unfold is definitely a treat. There’s also more hints of what is going on with Em’s story which was not seen much in Celia’s books. The addition of the zombies, and the witch school and involvement with nature was an entertainingly funny and sweet treat.

My focus drifts to my sisters. “Do what you have to and stay safe. Don’t worry about me.”

It’s a stupid thing to say. Of course they’ll worry. For once in our lives I’m the one who needs coddling. Not that I don’t absolutely hate it.

My hiking boots press into the ground as we move away from the road. They’re not what I count as cute shoes. But since my cute clothes tend to end up covered with blood and smelly supernatural fluids, here I am in jeans, a long-sleeved shirt and vest, and yeah, the hiking boots.

Bren leaps over a thick section of brush, landing smoothly as I try to figure out the closest way in. “It’s clear,” he says. “Come on.”

He means the first few feet are clear. I can’t see jack over these thick brambles. I look hopelessly to Emme, wishing I didn’t have to. She regards me almost apologetically, realizing what I’m asking her to do.

Emme is good at a lot of things: baking, scrapbooking, and keeping up on all our collective bills. But her aim sucks. So when she throws me over the brush with her force, it takes all I have not to scream. Thankfully Bren is good at catching, no matter how bad the throw.

“Christ,” I mutter as he eases me down.

Shayna inherited a bit of were from Koda’s essence. And while she’ll never heal or run as fast as a were, he gave her enough agility to clear the thick brambles without Emme’s help.

Poor Emme. Her aim isn’t any better on herself. Bren has to “go long” to keep her from slamming into a tree when she launches herself forward.

Shayna and I jog ahead to where Bren is lowering Emme to the ground. He kisses her cheek, a show of affection he often demonstrates to us, but this time she doesn’t welcome it like she once did. She meets his eyes, backing away slowly, as if she’s afraid to step too close. Bren frowns, speaking low. Emme answers with a nod, but again steps further away from him.

Shayna doesn’t seem to notice, skipping across the rugged terrain as if we’re out for a stroll and not walking into some evil crap we may have to kill before it rips us apart. But I notice. Something is definitely up with Emme. I stiffen when he strokes her cheek. And son of a bitch, it may have to do with Bren!

including a Coach® purse stuffed with an autographed copy of Sealed with a Curse,
an audiobook of A CURSED EMBRACE,
t-shirts, a water bottle, magnets, signed postcards, pins, and bookmarks.

Thank you for reviewing and hosting OF FLAME AND LIGHT today!

Thanks for the review, I’ve read the first 5 books in this series.

I was so excited to see that this one continues Taran’s story forward. She’s so fun and feisty. 🙂