Meagan pulled up to the driveway of the address Luke had given her and gawked at the house. Either photography or building clubs or the combination of both had been good to him. His house was a grand contemporary wooden structure. Slowly, she proceeded up the drive, taking in as many details as she could of the manicured yard.

Luke met her at the door.

“Your place is beautiful,” she said, instead of saying hello.

“And you’re surprised about that?” he asked, a hint of amusement tickling his lips.

“You are such an ass.” She pushed his chest to move him out of the way and stepped into the foyer.

He captured her wrist. “You’re on my turf now, sweetheart.”

She didn’t want him to see how the veiled warning made her knees weak and her heart race. “I’m here for you to photograph, nothing else, so drop the Dom attitude.”

He looked as though he wanted to say something else, but instead he nodded his head. “Let me show you where you can put your things, then we can go ahead and I’ll take you to the studio.”

From the way he sounded, he wanted to get this over and done with as quickly as possible. Fine. That was fine by her, too. She followed him down a hall that didn’t have any mattresses, but rather pottery pieces and paintings that gave the impression of an art gallery. With the number of windows the house had, the natural lighting was stunning. She sort of wished he’d walk slower so she could take it all in.

But he was a man on a mission and didn’t stop until he came to the end of the hallway. “I have the clothes I want you to wear in the bedroom.” He pointed to the door on his right. “There’s a bathroom in there you can use to get ready. When you’re dressed, come out this door, go across the patio and I’ll be waiting in the studio.”

With that said, he headed outside. Meagan put a hand to her stomach in a useless attempt to calm the butterflies. Holy shit, she was really going to do this. Taking a deep breath, she walked into the bedroom and hurried to the bed to see what he’d selected for her to wear.

She stood, staring at it for several long seconds. Then, with a sweep of her hand, she picked it up and carried it outside and into Luke’s studio.

“What the hell is this?” she asked, lifting the scrappy material up to his face.

“You said clothes. This isn’t clothing.”

He walked toward her with long strides, never moving his eyes from hers and when he stood before her, he took hold of her wrist. “Let’s agree on some ground rules, why don’t we?”

She was afraid to speak. If she didn’t say anything, maybe he wouldn’t know what the tone of his voice did to her. To counteract the delicious shivers running through her body, she lifted her chin. “Depends on what they are.”

“We both agree you’re not here as my submissive; however, I am the one in charge of these photography sessions and because of that, you’re going to listen and follow my directions.”

“That doesn’t sound so much like ground rules. Maybe more like you spouting things off and me blindly following.”

“Whatever you want to call it, sweetheart.” He nodded back toward the house. “Go change.”

She didn’t move. “You are such a pigheaded ass.”

Damn him for knowing the truth. “You’ll never know.”

The Exposure
by Tara Sue Me

New York Times bestselling author Tara Sue Me’s Submissive series is back with a scorching new romance that proves the difference between excitement and pain is just point of view...

As their sexual tension explodes, Meagan’s arrangement with her extortionist becomes more perilous, putting in danger her darkest secrets and the fragile passion between Luke and her. . . 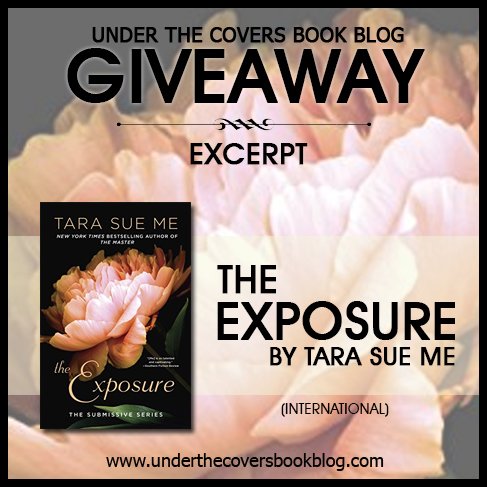 I love this! I absolutely love this series and I can’t wait to read this!

Great excerpt! I love this series and I was looking forward to Meagan and Luke’s story!

Would love to check out this series!

I enjoyed this thank you.

Love the series. Can’t wait to read The Exposure.

I haven’t read this series or anything else by Tara Sue Me .

i have not read it but would love to do