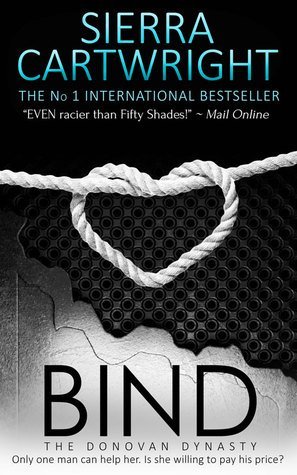 “Bind is one of those books that you can sit down to and realize in 2 hours that the time has flown by and you’re almost at the conclusion.”
~ Under the Covers

As an erotic romance reader and lover of all BDSM literature, you can take full liberty to gasp at the fact that I had never read Sierra Cartwright until Bind, the first installment in her Donovan series.  This series takes place in the heart of Texas, where rival corporate dynasties are vying for pieces of the pie.  Lara Bertrand is a smart and shrewd businesswoman with her livelihood on the line.  Her family business has been losing revenue and her father, as much as she loves him, has trouble changing his ways.  They need outside help fast.  Connor Donovan runs a rival corporate empire after the loss of his father a few years ago.  He’s powerful, beautiful, and willing to help Lara out when she approaches him with a proposal of sorts. Lara asks Connor to marry her as a business move, allowing both his capital and decision making power to infiltrate and save her company.  Despite Lara’s attraction to Connor, she knows this will be a temporary arrangement.  Connor, however, has other ideas.  He won’t entertain this proposal without Lara’s complete surrender in the bedroom.  He’s a Dominant through and through, and won’t stand for a marriage in name only.  Lara has always known that her sexual tastes have been hard to satisfy.  Agreeing to Connor’s demands is terrifying and exhilarating at the same time, but a chance she may have to take.

Bind is one of those books that you can sit down to and realize in 2 hours that the time has flown by and you’re almost at the conclusion.  Ms. Cartwright’s writing flows easily, from the transitions to the dialog.  It’s natural and moves at a nice pace.  The construct of BDSM tendencies among rich businessman is not a new one, but this story was unique in that it involved two players who are equal in terms of their positions within the business world.  Lara is a strong woman and she has the guts to approach Connor with a marriage proposal, not the other way around. The negotiations that ensue are on a level playing field without a hint of coercion.  Make no mistake, Connor is seductive and aims to show Lara just how submissive she really is in the bedroom.  They have great chemistry from the get-go.  Their sex is dirty and playful, a little pain mixed with a lot of pleasure.  This is a great book for those who like the sensual and seductive side of BDSM.  It’s done very well here.  There’s a fair amount of humor mixed into the dialog between the couple and their family members and I was smiling often during my reading.  Connor’s brothers have interesting backgrounds and it’s clear that the next 2 installments will feature their stories.  The love angle of between Connor and Lara moved a little too quickly for me, but we are just at the beginning of their relationship, so lots of time for that to develop as a side story in future books.  All in all, this was an entertaining, sexy, light BDSM read for me: low on the angst and high on the feel good factor.  I have a feeling book two might be more angsty, but time will tell! 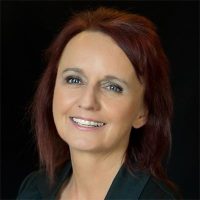 Sierra is a USA Today, International Best-Selling author who wrote her first book at age nine and hasn't stopped since.
Sierra invites you to share the complex journey of love and desire, of surrender and commitment.
Her own journey has taught her that trusting takes guts and courage, and her work is a celebration for everyone who is willing to take that risk.

Welcome to the world of Sierra Cartwright. You picked a good one to start with although I have loved all of her books. Love this series. Those Donovan’s . . . *sigh* Need to read Boss though. Maybe I will go do that now.

This just came up as a recommendation so thanks for this!