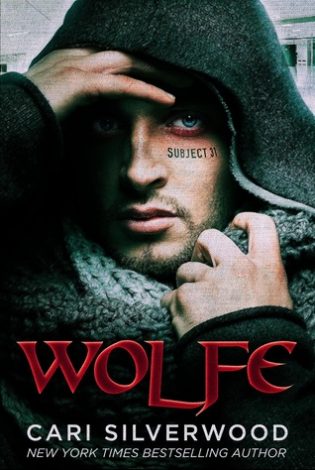 “In masterful fashion, Ms. Silverwood found a way to make a dubious consent novel about the HEA and I finished smiling a big fat goofy smile.”
~ Under the Covers

If you’ve read Cari Silverwood’s Dark Hearts series, you’ve become familiar with the man for whom this spin-off is named: Wolfe. Wolfe was the subject of top secret human experimentation, left to survive at the bottom of a missile silo in Thailand. When he is recued, his wounds seem too severe to recover fully from. His nurse, Kiara, enjoys watching him make milestone after milestone, amazed at the juxtaposition between his rough appearance and what appears to be a gentle and caring side. This will make it that much harder to hand him over to Russian intelligence. Under threat of harm to her parents, she feels she has no other option. As his medication dosages are lowered, Wolfe’s hidden powers and his animalistic begin to take over. Kiara needs to keep him in line as they made their escape. But Wolfe has other plans and Kiara might just find that she likes the beast a bit more than she anticipated.

This has to be one of my top Cari Silverwood releases to date. I am a massive fan of her dark and dubious consent erotica, and Wolfe doesn’t disappoint. It’s very much a character and relationship driven story. While there is some well written and chill-inducing action/suspense, as we’d expect from Ms. Silverwood, it doesn’t overshadow the time we spend with Kiara and Wolfe. For the most part, the story is told from each of their alternating perspectives. I have never found this jarring as a reader where this author is concerned as the action and thought processes flow smoothly from one scene to the next. Kiara is bright and not one to back down from her desires. She’s one of my favorite types of characters: logical and bright, not a pushover, but able to cope with the discoveries she makes about herself along the way. It was so much fun watching her go from mind-controlled victim to complicit party in her relationship with Wolfe. Wolfe alternates from sweet and flirty to sadistic sex god at varying times, and the sex is mild-blowingly, OH SO GOOD. I’ve read it all in through the years, and unfortunately it’s all too common for me to love a story, but not find much interest in the sex. I don’t need to be shocked, but I do need the chemistry to melt the pages, the dirty talk to be dirty, but not trying too hard, and the kink level to go beyond a little slap and tickle. Wolfe brings all that and more. When I get sucked in to a scene so hard that I fail to notice the chaos around me, you know it’s good. That should be enough to warn you that the content isn’t always warm and fuzzy and the line of consent is ridden quite hard. Not a safeword to be found. I routed for Wolfe and Kiara the entire way through. I wanted them to find their way to happiness and I think other readers will too. In masterful fashion, Ms. Silverwood found a way to make a dubious consent novel about the HEA and I finished smiling a big fat goofy smile.

Wow! I’ll have to give this a try. Thanks, Jennifer!

Great review. You grabbed my attention towards this author

I like your descriptions of the characters so I may try this. Thank you