Exclusive (NSFW) Excerpt from Loving You Easy by Roni Loren
*Setup: Cora sneaks into a dark hallway to escape a work party and ends up an unintended voyeur.

Two shadowed forms came into view and passed by Cora as they headed toward the back of the hallway. The fine hairs that had escaped the twist in Cora’s hair fluttered against her face as the couple kicked up a breeze in their wake, but neither noticed her. She was just another shadow.

Cora squinted. There was enough light that she could make out the height of the man, the petiteness of the woman, but not much else. They were walking close together, obviously sneaking away for something and in a hurry. Cora glanced toward the entrance and the rectangle of light that led back to the party. She needed to bail.

“Keep it up with the laughing,” the man said, his voice low but ringing with authority. “See how long it takes me to shut you up.”

Cora stiffened and her attention swung back to the couple.

But the woman made a sound like she’d just taken a bite of the best chocolate. “Look forward to it, sir.”

Sir. The word rang through Cora. Reverberated. Sir. It meant a very specific thing to Cora. But this couldn’t be that. Her mind was just stuck on Dmitry and the game. This was probably some assistant and her boss sneaking off to make out. She needed to leave, make it known that they weren’t alone. Hello, innocent bystander here! I was just leaving. Don’t mind me!

And she was all prepared to do that until she heard the sound of a zipper and shift of fabric. She turned her head automatically toward the noise, the harsh unzipping like a beacon.

The woman’s breaths were sharp in the darkness—quick, anticipatory. Sexual.

Cora tried to pull her attention from them, tried to make her feet work.

Look away, Cora. Look away!

The man’s voice sliced through the silence like a bullet. “Suck it.”

The two utterly male words filled the dark space and hit Cora like a knee to the gut, stealing her air. The command wasn’t directed at her, but, God, she wasn’t sure she’d ever heard anything hotter. Suck it. It should’ve sounded stupid. Juvenile. It so didn’t. Her free hand pressed flat against the wall, and she tried to stop breathing altogether.

There was a rustle of movement—the woman getting to her knees, no doubt, and the man showing her what to suck.

Cora decided then and there that she was a bad, bad person because goddamn, she couldn’t make herself leave now. She couldn’t look away. It was the Hayven game manifesting in real life, and she had a front row ticket.

She blinked a few times, trying to focus her vision. Now that she hadn’t looked at her phone for a minute, her eyes were adjusting to the inky darkness. The couple was a few yards away from where Cora had tucked herself between the stacks of plastic crates. She wouldn’t be completely hidden from their view if they looked her way hard enough, but both seemed too involved to bother.

Cora held her breath. The whole room seemed to hold its breath. Like air had ceased to move. A still, heavy quiet.

Then, her phone vibrated against her chest, nearly causing her to yelp and give herself away. She cringed and pressed the phone harder against her shirt to make sure no light peeked out before she could hit the button to darken it. Her gaze stayed fixed on the view in front of her, her heart pounding in her ears. Thankfully, her companions didn’t notice anything was amiss. They were too wrapped up in the moment.

The man dragged his palm along the side of the woman’s head and then wound her ponytail around his fist. Once. Twice. Deliberate. Menacing.

Cora couldn’t see the man’s open fly, but his rough grip on the woman’s hair had Cora’s scalp tingling, imagining what that must feel like.

“Open wider,” he commanded. “You’ve been begging for this for how long? Now you’re going to take it all. Hands behind your back.”

The woman moaned and leaned forward, taking him into her mouth and linking her hands together behind her back like some sort of reverse prayer. Her head bobbed as she went to work on him—slow and sensual, taking her time like she was savoring every moment. A hypnotic pace. One Cora was sure she’d never used with a guy.

But as compelling as that view was, Cora found her gaze tracking upward, seeking out the one running this show. The one called sir. The man was tall, broad-shouldered—black hair, maybe. She couldn’t make out much else. But there was an air of authority about him, this cool composure, like he was somehow doing a favor for this woman even though he was the one getting head. Like he was almost . . . bored.

Her gaze fell on the hard grip of his hand, watched the knuckles flex with the force of how hard yet controlled he was using the woman’s mouth now. In. Out. Deep. Steady. Yes. Like that. She could imagine his thoughts. His inner commands. Suck it like you love it. Take it and swallow every inch.

It was something she could imagine Dmitry saying. A rush of warmth settled between Cora’s thighs, turning her panties from damp to embarrassing. She was throbbing there. This shouldn’t flip her switches. She shouldn’t be watching. But seeing one of the scenes from her game played out in real life was damn riveting. She’d never witnessed real life dominance. Hell, she hadn’t known it existed until a few years ago when she’d been interning at the station and had stumbled upon some kinky videos on a suspect’s computer. The guy had turned out to be innocent of anything, but her curiosity had been piqued.

She’d watched her fair share of naughty videos since then, but those had never pulled it off for her. And the one time she’d considered bringing up the idea of kink to Kevin, she’d chickened out.

She hadn’t been able to imagine being that vulnerable with him. There was naked and then there was naked. And she would’ve been mortified if he’d laughed at the suggestion or teased her about it. So, she’d turned to Hayven to explore on her own in a low-risk way.

But as much fun as she had with Dmitry, virtual couldn’t mimic this. This was different. Raw. Dangerous. The woman had to be scared they’d get caught, but she was going to obey. What did that level of edge bring to the sex? Cora imagined it brought a lot based on how she was feeling just from watching. And even though there was no kinky equipment or elaborate setup, some part of her knew without a doubt what she was witnessing. This man was a dominant. This was a scene.

“This is the only time you’re going to get this cock,” the man said, gravel in his voice. “Better make it count.”

The woman moved faster. Wet, hungry noises drifted from the darkened corner, making it sound like she was the one about to come even though he only had a hand in her hair.

Lord, to be so openly sexual and unashamed about it. Most people would probably judge this woman. She was being used, treated like a whore. But Cora could feel it, the mutual pleasure of this.

This was a woman who was getting exactly what she craved and loving it. An unexpected wisp of jealousy wound through Cora.

“You’re going to drink down everything I have,” the man said. “And then you’re going to go out there and kiss your boyfriend on the mouth. I wonder if he’ll be able to taste what a filthy girl you are.”

Cora’s belly dipped. Fuck. The woman’s boyfriend was at the party?

Cora should be appalled.

Her phone vibrated again. She held it tight, but this time, it grazed her silver necklace, making the faintest of noises.

Oh, shit. No. No! She shifted it quickly, silencing it completely, but when she glanced up, the man’s head had lifted.

He was staring her way, his gaze narrowing and then locking on her as his vision probably adjusted. Click. His face was half in shadow but she could see enough. Dark hair, angled jaw, full mouth, Asian. Gorgeous.

She was frozen in the headlights of that look. An apology hovered on her lips. Her feet were ready to run. But he had her pinned. He may as well have had a hand pressed to her chest, forcing her to stay there against the wall.

“That’s right,” the man said, holding Cora’s gaze as the woman continued to pleasure him. “Take it all in. Every bit of it.” 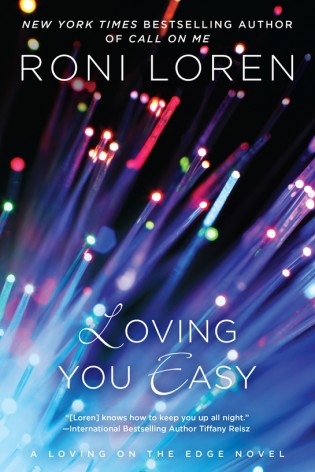 Loving You Easy
by Roni Loren

Cora has an amazing sex life. She’s beautiful, daring, and the most popular submissive in Hayven. Too bad none of it’s real...

IT specialist Cora Benning has figured out the key to her formerly disastrous love life—make it virtual. In the online world of Hayven, she’s free of her geek girl image and can indulge her most private fantasies with a sexy, mysterious master without anyone in her life discovering her secrets. Until her information is hacked and she finds herself working to fix the breach under two very powerful men—one who seems all too familiar...

Best friends and business partners Ren Muroya and Hayes Fox were once revered dominants. Then Hayes was wrongfully sent to prison and everything changed. Ren wants to get back to who they were. Hayes can’t risk it. But when they discover the new IT specialist is their online fascination, and that she’s never felt a dominant’s touch, the temptation to turn virtual into reality becomes all too great… 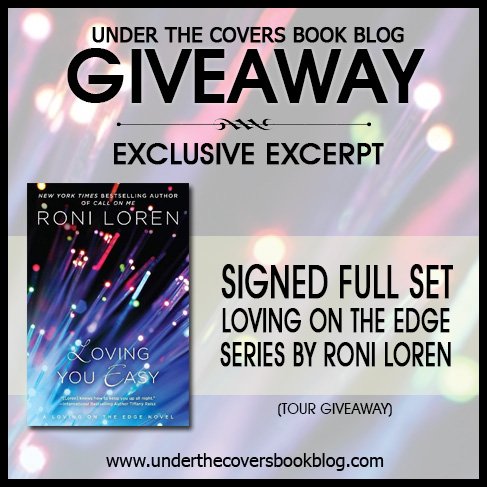 WOW! That was hot!