The hero, Jayson Harmon, a wounded Special Forces lieutenant, is telling his girlfriend, feline shifter Layla Halliwell, the heroine, about a conversation he had earlier that day with the deputy director of the Department of Covert Ops, Dick Coleman. The deputy director wants him to take an experimental serum that can not only heal Jayson’s injuries, but make him something close to superhuman. While readers (and almost everyone in the X-OPS Series) knows that Dick is always up to no good, Jayson, who is in a bad place in his life right now, doesn’t realize the deputy director is using him. While the experimental serum Dick wants him to take could make Jayson practically superhuman, it’s also beyond dangerous. But can Layla make him understand that?

Anger like she’d never felt consumed her, and she felt little stabs of pain on the tips of her fingers as her claws extended too fast. Dick was flat- out using Jayson’s insecurities about his injuries to manipulate the hell out of him, and if the deputy had been there right then, she would have ripped off his lying face.

Jayson flushed beneath his tan, and Layla immediately regretted her choice of words. She’d made it sound like she thought he was the kind of guy who could be used in the first place—a victim. It was the worst, most hurtful thing she could have said.

“Yes, you did,” he shot back. “Dick isn’t using me. On the contrary, he’s doing everything he can to help me. He’s not looking at me with pity. He’s not reminding me to use my cane. And he’s sure as hell not telling me to stop fighting and get used to being a cripple.”

“Don’t call yourself that!” she snapped.

“Why not? It’s what I am!” He muttered a curse and ran his hand through his hair, making it stick up every which way. “Look, I might barely be able to walk some days, but I’m not blind. I know how much you and everyone else hate Dick, and maybe you have your reasons. But knowing what it’s like having people prejudge and dismiss me two seconds after seeing my limp, I’m willing to give him the benefit of the doubt. Regardless of what you think, he’s not using me. He’s giving me a chance to flip the script and get my fucking life back.”

Layla knew it would be better to let it go for now and try to talk to Jayson when he’d cooled off. He had to believe Dick was being honest and that this drug could fix him. Because if he didn’t, he’d be admitting he was never going to get any better than he was right now. But how could she let it go? How could she let the man she was in love with take a drug that might turn him into something she didn’t even recognize— or worse?

“Get your life back, huh?” she asked. “By taking a drug that could end it?”

When he didn’t answer, Layla stepped closer and took his hand. She wanted him to know that she was there and wasn’t going anywhere.

“I know how hard your injuries have been on you, but are you so desperate to get back what you had that you’re willing to risk your life without even thinking about us?”

“I am thinking about us,” he said softly. “What kind of life do you think we’re going to have if I can barely walk?”

“Our life will be just fine.” She squeezed his hand. “I don’t care about your physical limitations as long as we’re together.”

He yanked his hand out of her grasp with a snort. “That’s easy for a person to say when they can jump out a two- story window and land on their feet. It’s even easier for a person who’s likely to be somewhere on the other side of the world in the next few days, chasing arms dealers and saving the world. But it’s not nearly as easy for the person left behind.” He shook his head, the pain in his eyes breaking her heart. “Layla, I can’t even pick you up and carry you to my bed.”

Tears stung her eyes and she blinked them back. “Then we’ll walk there together.”

“There are some days I’m not even sure I can manage that.” He shook his head, his blue eyes as sad as she’d ever seen them. “You don’t get it. You never will.”

He picked up their plates and slowly walked across the kitchen to put them in the sink.

“Maybe you should go,” he said in a voice so low she barely heard it even with her keen shifter hearing.

Layla froze. Her heart felt like someone had ripped it out and stepped on it. The pain was so intense, she had to grab the edge of the table for support. Thirty minutes ago, she thought things were back to the way they used to be. Now, it looked like this might be the end for them.

She turned to leave, tears blurring her vision. She hoped Jayson would stop her before she reached the door, but he didn’t. She paused, her hand on the knob, then turned to look at him. He was still standing at the sink, his back to her.

“I know I don’t have any right to ask this, but could you at least wait until I get back from wherever it is I’m going on this mission until you do anything?” she asked. “Please.”

Stifling a sob, she whirled around and jerked open the door. His soft voice stopped her.

“I’ll try, but I can’t make any promises. This is a decision I have to make on my own.”

The words were like a knife in her already trampled heart.

Her Rogue Alpha
by Paige Tyler

"Does it get any better than this? Tyler...is an absolute master of the genre!"-Fresh Fiction for Her Wild Hero

HE'LL DO ANYTHING FOR HER
Former Special Forces Lieutenant Jayson Harmon can't believe that his war scars don't matter to beautiful feline shifter Layla Halliwell. Why would she saddle herself with a broken man?

But Layla knows that Jayson is a hero to the core, and that only she can heal his wounded soul. So when Jayson is deployed on another deadly mission, no way is Layla staying behind... 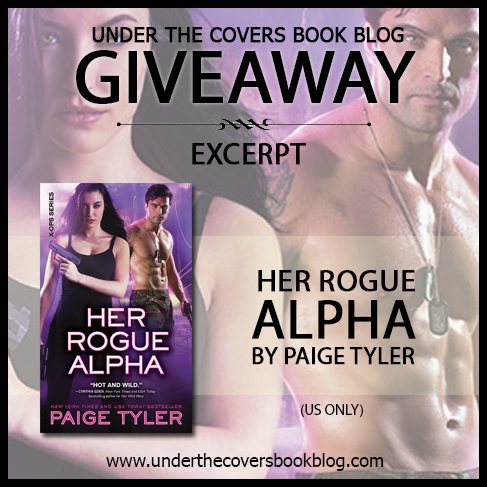 Thanks for the share of the book and excerpt.

Love this series!!thanks for sharing!!!

LOVE this series!! Can’t wait to read this one!

Wow that was an intense scene! Thanks

I do love this kind of romantic suspense story!