Apprentice in Death
by J.D. Robb

“There are so many books in this series that I know it can be intimidating but trust me when I say that you won’t encounter another world like this one.”
~ Under the Covers

Can you believe that there are already 43 books in this series already? And yet, none of these books are written the same. In APPRENTICE IN DEATH, readers are taken into the killer’s mind as they take three people out at an outdoor ice skating rink. Three people who are seemingly unconnected, but Eve Dallas thinks that there must be more to this long-distance serial killer’s motive than meets the eye.

Right from the get-go, this book delves into the police procedural aspect of the novel and in all honesty, it doesn’t ever really stop. Once Roarke finds out that big guns were used in committing these murders, he’s all over it like white on rice. With Roarke by her side, Eve is able to make deductions about the murder.

As I mentioned, progress in their personal life is not as prominent in this installment. They are, however, in the process of redecorating their home to suit both of their tastes. In any other book or series, something like this wouldn’t be seen as something big or monumental, but for Eve and Roarke, designing a space for themselves is an intimate process. And it is one that showcased a lot of things about their relationship and commitment to one another. For many, it’s a small step, but for them, it’s almost as big as Eve’s decision to marry Roarke.

First off, the world is written in the future so there are a few linguistic changes that have occurred in this world. There is made up slang that we don’t have in our world, but also although Eve is a professional woman, her mind is actually not that complicated. She’s a straight-shooter in her work and the way the book is written —very straight and to the point —mimics that. So essentially, I see the writing style as an extension of Eve’s character since all the books are mostly written from her POV. This style of writing doesn’t mean that the book is poorly written. It may just be that the way Eve’s mind works doesn’t work well with the reader. So best thing to do is, try a book out and see if it’s something you can get on board with. There are so many books in this series that I know it can be intimidating but trust me when I say that you won’t encounter another world like this one. 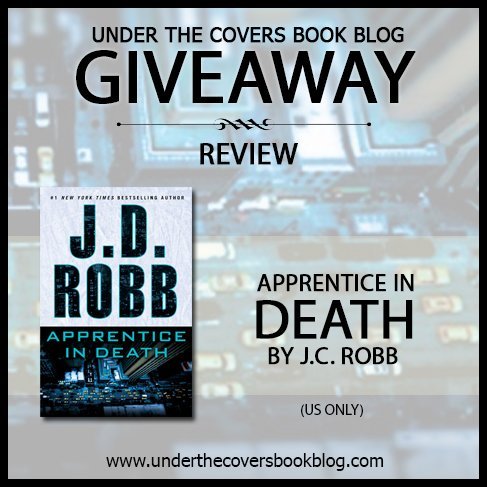 This giveaway is sponsored by Penguin Random House

Awesome review! This is a great series!

Under the Covers Book Blog
Admin
Reply to  sherry bauer

It is! Don’t you love Roarke?

I LOVE JD Robb’s In Death series, I never miss one of them!! Now I can’t wait to read this one!!!

My most favorite series of all time. Can’t wait to read this one.

Goodness! Where has the time gone? Book 43? Wow! I have been a huge fan of this series since the beginning! I totally agree with your thoughts about the writing style. It is Eve. It has never bothered me and I don’t get why others are bothered. But I guess, different strokes and all. I need to go read now. Thank you. Great review.

Under the Covers Book Blog
Admin
Reply to  Pansy Petal

If you know Eve then you know she isn’t the type to beat around the bush. She’s a no-nonsense type of gal and I think the writing style reflects that nicely.

I was lucky enough to be first on the waiting list at the library and got my copy Tues. and read all but the last 25 pages (will finish after work). Gotta say, this was not one of my favorites. The story is very simple and too easily and quickly solved. The story line is like a marshmallow, when you squeeze the 384 pages for details and events they disappear like the size of a marshmallow when you get rid of the air. Same with the secondary characters, most of the usual suspects show up, but it was like all… Read more »

I understand what you’re saying. I don’t think it’s one of my top faves either but I still absolutely love the book. There’s something to be said about having a mystery series as a comfort read. I just feel like whenever I pick up this series, I can get into the groove pretty quickly and just enjoy the ride.

Roarke is at the top of my list for book boyfriends of should I say My Men, because he is all man. I’m glad that you addressed the writing style- I agree with both sides and I too, find the cases a little trite and easily solved but there have been several that are fantastic. My heart pounded when Peabody was trapped in the locker room with the dirty cop. When the teenage daughter answered the door and was killed and in the first book- the pain that incest caused. I don’t read this series for the crime- I read… Read more »

Totally agree with you. After 43 instalments in the series, I think it’s getting harder and harder to come up with some original ideas. Robb definitely has some amazing stories in the series but I don’t expect every single one of them to hit hard every time. It’s going to be different for everyone I think because what might resonate with one reader may not evoke any emotion at all from another. But that’s what’s so cool about this series. With so many cases, you’re bound to love at least one of them. I’m like you. I love the cases… Read more »

So excited to read this one!

I had seen that about you the writing. Thank you for your explanation

I absolutely love this series & have fallen behind. Now that I have the Hoopla app, I need to see if the audios are available since my library doesn’t have them anymore.

I Love this series! I’ve read them all over the last few years & have been thinking about starting at the beginning again!

Thanks for the post, I haven’t read this series.

Thanks for the review—I’ve been reading this series for years and years and I have loved every single book in the series that I have read!

I LOVE this series, Eve and Roark are one of my favorite couples. Thanks for this review. Cant wait to read this !