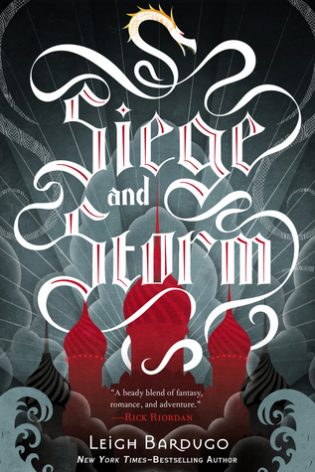 Siege and Storm
by Leigh Bardugo

“I think his character adds so much to this series and I would definitely recommend reading this series for the Darkling alone.”
~ Under the Covers

In book two of The Grisha series, SEIGE AND STORM finds Alina and Mal on the True Sea, trying to survive and rebuild their lives after the events of the Fold. As this book continues right where this one ends off, I would highly suggest reading this series in order. There is also quite a lot of terminology that new readers might not be familiar with if they start here.

That being said, Alina and Mal are once again together fighting against the Darkling who has returned and is now more powerful. First off, let me say that I absolutely love Alina and Mal together. I’m gonna go and say that I want these two together because although there are other people who may interest Alina, I feel like her and Mal just mesh together better. If you guys have already read this series, feel free to tell me what you think but despite their issues in this book, I don’t believe someone else can or will come between them.

But in addition to loving Mal and Alina, I absolutely love the villain as well. The Darkling is someone who’ve we’ve seen in the first book of the series but in this book, I think I may like him even more. Bardugo does a great job of developing his character and you actually feel his power as you read. He has this presence that translate across the page well, making you feel those creepy-crawling feelings whenever he is in a scene. I think his character adds so much to this series and I would definitely recommend reading this series for the Darkling alone.

With only one book left in the series, I’m a little bit sad that it’s nearly over. I feel like I could read about Mal and Alina forever. There is, however, a spin-off series so I will definitely be jumping into that trilogy as soon as I’m done with the last book in the series.

Looking forward to starting this series

Hoping to get to these soon, thanks Annie for sharing your thoughts

It’s a great series guys! I hope you try it!

I loved the allure of the Darkling. I loved not knowing whether to trust him or despise him. He’s such a multifaceted character. I loved this series (pretty sure I’ve mentioned this to you before). Haha!