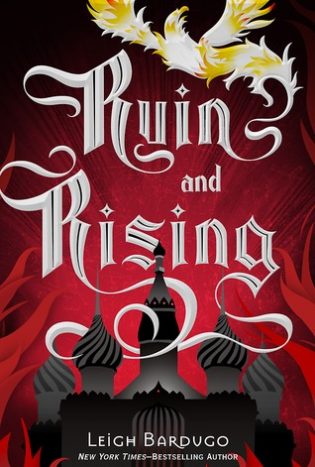 Ruin and Rising
by Leigh Bardugo

“I like [Bardugo’s] writing style and the fact that she doesn’t dumb down her writing or vocabulary for teens reading this series. This entire series is complex and intriguing, perfect for teens or adults alike!”
~ Under the Covers

RUIN AND RISING is the last book in The Grisha series. It’s been a whirlwind of a journey following Alina and Mal throughout the series and I’m pretty content of where they have ended up. I can imagine some people being a little bit upset with what happens in this book but I didn’t mind it personally. I think it made for good conflict without completely changing a character.

Alina is easily the best thing about this series. I can’t remember a YA heroine that I loved recently as much as I adore Alina. She has spirit, yet she doesn’t act without thinking things through. She’s tough and strong, and despite having Mal in the background to lean on, she doesn’t always use him as a crutch. Alina is very much capable of standing on her own two feet even when things get hard.

I’m really glad to have read this series. I know I’m a little late on the bandwagon but Leigh Bardugo will certainly become an author I will keep my eyes on. I like her writing style and the fact that she doesn’t dumb down her writing or vocabulary for teens reading this series. This entire series is complex and intriguing, perfect for teens or adults alike!

So glad this series continues to impress! It’s in my TBR pile.

Hope you give it a shot!

Can’t wait to read them all

they are super fun! I hope you do!