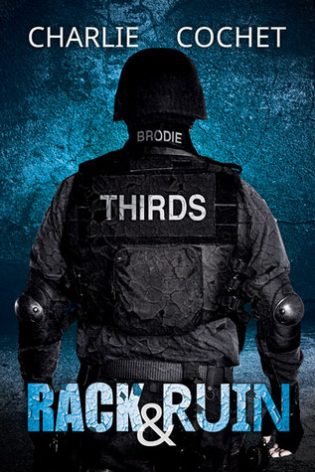 “This is easily my favorite series I’ve discovered this year.”
~ Under the Covers

Yup. Still obsessed. RACK & RUIN is another book for Dex and Sloane but this book opens up a lot of possibilities for the other guys to get together. But before I get into that, the romance between Dex and Sloane continues to build. They are far from perfect but the both of them are trying very hard to make this thing between them work. This is where I think the angst increases from the last book. We get a lot of details from Sloane’s past, which is probably my favorite part of the book. The twists and surprises are gut wrenching and now we know why Sloane acts the way he is. We also see his bond with Ash and how their friendship started in the first place. This is one of my favorite things of this book. Cochet creates such a good balance of brotherhood and romance in this book that you can’t help but love Dex and Sloane, but all the other guys.

Speaking of the other guys, as I mentioned before, things have progressed between a lot of the other guys. Calvin and Hobbs have some shit to deal with but I think the worst of the bunch is poor Ash and Cael. These two have a long way to go if they want to end up together. There’s even mention of another couple, Seb and Hudson, that I’m looking forward to seeing if Cochet will try to make amends between the two and give them a happily ever after. Obviously, I want a HEA for all of them and that’s a rare thing for me to love every character in the series.

In terms of the THIRDS storyline, I think this is the best book of the series. So much happens and at the end, it’s a very rewarding experience. The way the guys work together in this book is touching and you can really tell that they love each other and have each other’s back. This reminds me a lot of Sidewinder series from Abigail Roux. So if you like that brotherly camaraderie between characters, you’re going to want to try this series. This is easily my favorite series I’ve discovered this year.

Thanks for the review, I’m reading Hell and High Water right now.

What do you think? Are you liking it??

Amy R
Reply to  Under the Covers Book Blog

I loved it and started Blood and Thunder this morning. I’m really enjoying the audio version as well.

I’m really loving this series too. Check out the audio versions if you haven’t already.

Under the Covers Book Blog
Admin
Reply to  Lisa

I have! The audiobooks are the best way to enjoy this series!

I am so hoping to get more books from this series for my birthday. David– that is a hint!! Thank you for reviewing and loving it

Yesssssssssss, you need to read! And then tell me what you think! 😀

Oh man, I MUST start these! I’ve heard only rave reviews about them. Thanks!

I held it off for so long because of the hype, but the hype is real! It’s amazing!

Hope you give this series a shot, Timitra!