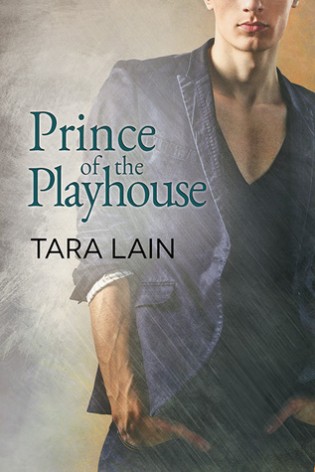 Prince of the Playhouse
by Tara Lain

“I wanted more passion, more connection and a frankly a bit more drama.”
~ Under the Covers

One thing I’ve enjoyed in this series are the polar opposite pairings.  There’s usually one character who is very manly and one who is the flamboyant of the two.  In this particular book, there was something missing to this dynamic even though on paper it seems to be that same formula.

Ru is a fashion designer and there’s nothing understated about him.  He’s just been given the opportunity to design costumes for a production of Hamlet that could spring his career forward.  It’s also a chance to work closely with the actor he has been lusting after for three years.  Gray is a young action star that shot to fame quickly and has been hiding his sexual orientation from everyone, including his family with no plans of changing that fact, when he meets Ru and can’t help but want him to be his next fling.

I was expecting Gray to be that manly figure, and for all intents and purposes he is.  But maybe he wasn’t as rough around the edges as I was looking for to contrast Ru.  I can’t put my finger on it.  I just didn’t quite get to the point of caring about Gray all that much.  And from his initial attraction to Ru all the way to the I Love Yous, I didn’t buy it from him.

But putting the issue of the main characters aside, I found that in this story the author jumped a bit too fast into a physical relationship.  To the point I was thrown for a loop when the first sex scene happens because I almost got whiplash.  I would’ve loved to see them taking some time to develop a friendship.  Or even act out of the sheer need to be together, but then still have some page time to really connect.  Instead it just felt like we were being sped along into a relationship that felt like had very little base to succeed and I only got more frustrated with Gray because of it.

I still found the story enjoyable overall and I’ll be looking forward to reading the next in the series.  But sadly I can’t say this was my favorite.  I wanted more passion, more connection and a frankly a bit more drama.