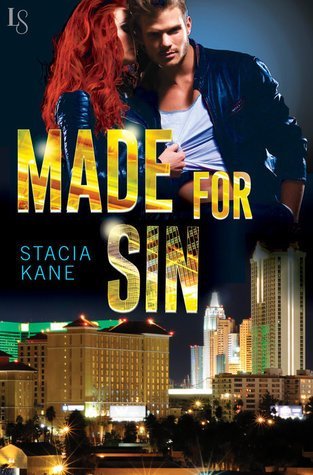 Made For Sin
by Stacia Kane

“This is Stacia Kane we’re talking about here! She’s written some great books. Unfortunately, I was really hoping for more.”
~ Under the Covers

When I learned that Stacia Kane was coming out with a new book, I got super excited. As a huge fan of the Downside Ghosts series, I was curious to see if this book would be just as good as her other series. Now I don’t know if this book will become a series, but I can definitely see the potential there. MADE FOR SIN is an Urban Fantasy that follows PI E.L. Speare in Las Vegas.

It’s no surprise that I like the writing style since I do enjoy a lot of Kane’s other books. However, in terms of originality, this book doesn’t exactly offer something new to the genre. We have a PI protagonist who gets a new case involving murder, crime bosses and a bit of magic is thrown in as well. Speare took me a while to get used to. He’s not the most likeable character. He’s a bit cocky and a smartass, which don’t bother me on its own, but he does have this one relationship with a character that was unnecessarily complicated. I didn’t see the reason for it so I tended to roll my eyes whenever it occurred. I just didn’t like the way he acted with her, and his behavior is pretty much the same with a lot of other characters in the story as well although that didn’t bother me as much. So I guess I wasn’t fully sold on his character based off of this one book, but Kane can easily make this into a series and perhaps continue to develop his character.

The book explores quite a bit of demon mythology, which I enjoyed. But I would have liked to see it more fleshed out. It runs a little vague here and there and I wonder if that’s due to it being possibly a first book in the series and she plans on exploring more. Either way, it can be better.

The Vegas setting is fun and exciting but again, nothing that different from what we’ve seen before. I honestly wouldn’t have minded it if this was a new author on the scene, but this is Stacia Kane we’re talking about here! She’s written some great books. Unfortunately, I was really hoping for more.

If this becomes a series, I’ll continue to read. But as a stand alone, it’s decent but nothing earth shattering.

I got an ARC too and gave it the same rating. As the first book it needed more development and clearer world building. At least it wasn’t almost a carbon copy of her Downside series. I hate it when authors start a new series and it’s basically a rerun of the old one: different names, different city, same old, same old.

You’re right. It’s completely different but I don’t think it was nearly up to par with her previous work. It almost felt like a totally new author and a first book.

Sorry to see that this was just ok…

I still haven’t read her books and I want to read the Downside series. Sorry this one was a meh one with the hero.

Thanks for the review, bummer it was MEH as I’m always looking for new PNR/urban fantasy.