Welcome to Under the Covers, Scarlett! We are excited to have you here since your Second Circle Tattoos series has had some great response from readers! For those who haven’t read it yet, can you please tell us what the series is about?

Trent Andrews, owner and local “rock star” of tattooing, prides himself on being the best there is at everything that matters. Cujo, Trent’s best friend since kindergarten, is a walking paradox (that he’s scared of maniacal dogs is just the beginning of his self-contradictions). Pixie, their studio manager, thanks her lucky stars daily that the doorway she chose to sleep in when she moved to Miami belonged to two of the most amazing men ever. And tattoo artist, Lia, idolizes Bettie and loves men who get their hands dirty. Together, they’re a team. A family that they’ve built for themselves. And each book focuses on one of their stories.

The newest book in the series is THE DARKEST LINK. How would you describe Reid?

Reid is a good man who has dedicated his life to putting right the mistakes he’s made in the past. He’s guilt-ridden because of the impact his choices had on his sister, Harper, and struggles to live with price she had to pay. So he’s built a life that he’s comfortable with, but isn’t genuinely happy.

The heroine, Lia, is a tattoo artist and we love to be nosy. Do you have any tattoos? If so, care to share what they are?
I do have tattoos. The first one I got was one my husband created (he was an art major) which incorporates our astrological signs and our children’s birthstones. And my favorite was done by Luke Wessman, formerly of New York Ink fame at the Love Hate Social Club in New York. It is placed on my right hip and simply says A Life Less Ordinary, which is my life motto.

What would you say is Lia’s greatest strength and weakness?

Her greatest strength is her sense of self. She knows who she is, and has fought hard to become the woman she sees in the mirror every morning. Everything from the way she pins her hair in classic victory rolls, to the way she knows her own mind, effuses confidence.

Her greatest weakness is her need for love. She’s been shown so little of it, that she looks for it in all the wrong places until Reid comes along and shows her what it really looks like.

What was your favorite thing about writing this story?

There were so many great things about it. I loved writing the sex scenes between these two because with Reid’s bossiness and Lia’s confidence, the two were just flammable. But I loved the fact that I got to reunite Reid with his sister, Harper (The Strongest Steel). When I first came up with the idea for this series, I knew the two of them would get reunited in the fourth book, so it has been a long time coming.

Do you have a favorite scene or quote that you can share with us without giving any spoilers?

I loved writing Lia. She may well be my favorite heroine so far. She’s so strong and sassy, and it gave me a great opportunity to create all kinds of flirtatious dialogue for this straight shooter.

“If you’re asking me how much I like my Chanel Rouge Allure lipstick in pirate red, then I’d have to answer very. But if you are asking if you can remove it from my lips with yours without buying me dinner first, the answer is unequivocally yes.”

What does a day in your life typically look like?

I get everyone on their way to work/school by 9am, then I sit down at my desk. I do “business hour” … a tip I got from historical romance author, Kathryn Le Veque. It’s where I take care of admin, social media etc. Then I aim to write 2,000 words before lunch, and then another 2~3,000 words before dinner. I started life as an engineer at Toyota, so I have a very strict production schedule that I stick to. It is mapped out by day until the middle of 2017. When I wake up in the morning, I know exactly what I am meant to be writing or editing.

I am fortunate that I get sneaky pre-reads from my writing bestie, Sidney Halston, who I think is awesome. I recently read her upcoming October release, Pull Me Close, book one of the PANIC series (which is a huge departure from her Worth the Fight MMA series). I loved it!

What’s next for Scarlett Cole?

I recently signed a 7-book deal for two new series for St. Martin’s Press, so I have a lot of words to write. The first is a spin-off from The Purest Hook. We get to meet all four of Dred’s fellow Preload bandmates starting with Jordan. And the second is a Navy SEALs series called Love Over Duty. I recently finished the first book for each. And I’m also sneaking in a trip to Spain for some R&R and Sangria! Cheers!

Thanks for sharing with us today!

You are so welcome. Thanks so much for having me! 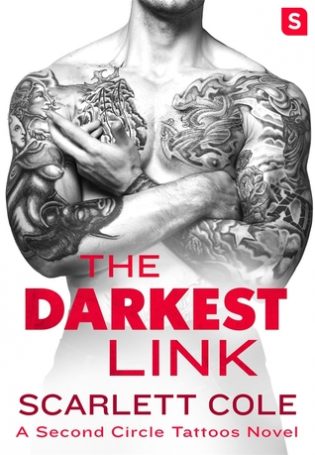 The Darkest Link
by Scarlett Cole

When her car breaks down off the side of a lonely highway far from her sunny Miami home, tattoo artist Lia never expected her very own white knight to ride up on the back of a barely street-legal motorcycle...and she never expected to fall for her dark savior. After a string of failed relationships and a bruised heart, Lia is not looking for forever, and the hot mechanic, with his sexy scruff and shaggy hair, is simply impossible to resist and the perfect candidate for mind-blowingly-perfect, no-strings-attached one night stand.

Reid left his life in Chicago far behind him and hasn't been back, but he's never been able to escape the guilt he feels about his own painful role in inviting a monster into his baby sister's life. A monster who almost destroyed her. Being with Lia is an unexpected gift, one he doesn't feel he deserves, and their one night together has him wanting more than he should. Especially since she doesn't know the truth about his past. However, when he finds Lia’s bracelet in his bed, he has the perfect excuse to drive down and surprise her at her tattoo studio, Second Circle Tattoos, in Miami. He's in for an even bigger shock - and a fist to the face - when his past and present collide in the humid Miami weather when he runs into the last person he’d ever expect to see in a tattoo studio: Harper, the sister he betrayed, and the last link to his former life.

When Scarlett isn't writing, she spends her time reading, hoarding mason jars, and working out to off-set an epic sour candy habit.

Having travelled the world for work and fun, Scarlett is a citizen of both Britain and Canada. A true city-dweller, she considers Toronto and Manchester home and likes to set her books in vibrant locations such as Miami and Los Angeles.