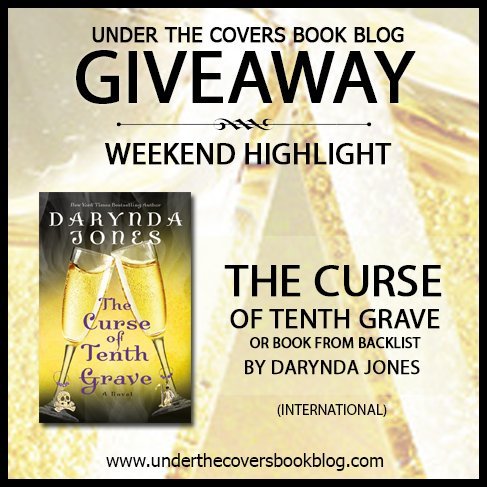 This is one of the BEST weekend highlights ever :). I hope you have fantastic holiday weekend! Thank you.

I cannot wait to read this

Love this series! Darynda Jones rocks!! Thanks for the chance and have a great holiday weekend! *)

Cannot wait to read this!

awesome another chance to get this book!!! so happy!!! thanks ladies!!!

This is one of my favorite series!!

Wishing you a great 4th of July weekend. Love this series. Ms. Jones is awesome! I would love to win.

I absofreakinglutely LOVE this series! I was pretty much in agreement with Angela (Reyes, Ubie, Beep). I’m dying for book 11 now!!!

One of my favorite series Ever !

Love your enthusiasm for the series, Angela. I feel that way, too. It’s neat getting the reveals and seeing all the big stuff coming their way. And wow, the stakes sure are getting higher and it’s sad to see the losses, too.

I can’t wait to read this. It’s one of my favorite series and go to for comfort books I read over and over. It’s downloaded already and I’m hoping to get to it tonight. Great choice for the feature!

I have them on my tbr . I read the first one and i loved it . Have to start the rest soon because this book sounds great .

Love this series and am exce to see what happens next.

I love this series and can’t wait for more Charley and Reyes!!

I love this series and am looking forward to reading this!

This series is fantastic. Can’t wait to read The Curse of the Tenth Grave. I love Charley and Reyes!

Have this series in my TBR pile. Can’t wait to read more of Charley. 🙂

I love Charley and Reyes and can’t wait to read 10th Grave!

I am so in love with this series! Charlie and Cookie keep me laughing, and who could forget Uncle Bobert! Then there is Reyes, oh yeah he is my book husband!