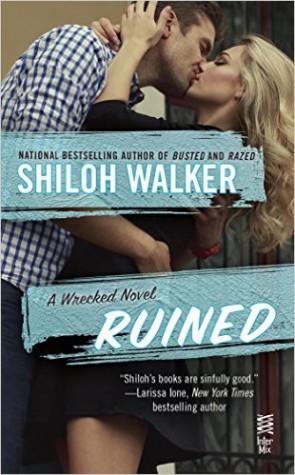 “I enjoy reading this series because I know I can always count on emotion, chemistry and the sense of family.  RUINED is another great installment of that.”
~ Under the Covers

I have been wanting to know more about Sebastien Barnes since the beginning.  He’s the younger Barnes brother and a movie star.  While his older brother stepped away from the limelight, Sebastien has been nothing but successful in it, he’s become quite the popular actor and even named Sexiest Man Alive!  He can have any woman he wants and usually does, except the only one he’s always really wanted sees him as a friend and family.  He’s had a crush on Marin, his older brother’s friend and fellow actress, since he was a teenager.  His first (and only) crush.  But other than getting close to her during filming, she won’t give him a shot.  He’s too much of a playboy, and enjoys the Hollywood lifestyle more than Marin wants at this point in her life.  She’s older and she wants to settle down in a nice and quiet life that she knows Sebastien wouldn’t be able to give her.

But everything changes after an attack that leaves Sebastien scarred both physically and emotionally.  It’s been a year since that day and he’s still not ready to face the world.  The only one he lets in is Marin, but he doesn’t think he’s good enough for her anymore.

This story was so sweet!  I loved the setup of Sebastien being in love with Marin, even though he didn’t know it was love, from when he was basically a kid and then now finally getting the girl.  He had to grow up, and it took something very hard and difficult for that to happen.  But through all that, his love for Marin always showed.  Their chemistry was great on and off the screen.

My one complaint with this story is how there’s one issue of miscommunication (or lack of communication) that gets dragged on for a bit towards the end.  We all knew it had to come out and be talked about, so the beating around the bush and allowing misconceptions to form got on my nerves a bit.  Pet peeve of mine.  But with all that aside, I thought they were adorably cute together.  This is a trope I don’t read often where the hero is younger than the heroine, and it was nice to see that she didn’t automatically treat him like a kid just because of his age.

I enjoy reading this series because I know I can always count on emotion, chemistry and the sense of family.  RUINED is another great installment of that.   It was nice to see the family rallying around Sebastien, getting mad at him at times when he was being hard headed, supporting him when he allowed them.   As always, I’m ready for whatever Ms. Walker will write next!

Sounds good but yeah miscommunication can get annoying

Thanks for the review, I’ve only read book 1 in this series.