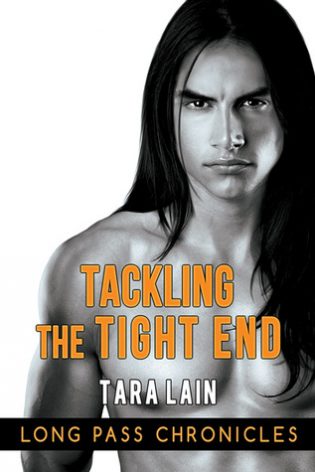 “There’s always good chemistry between the characters and TACKLING THE TIGHT END was no different.  Dennis and Raven were sexy, especially as Dennis had to be eased into exploring that attraction.”
~ Under the Covers

In this installment in the Long Pass Chronicles we have a Native American who is pretty good at football.  But his passion is to work with gay kids.  He doesn’t have enough love for football to consider it worth the physical risks that a pro career would entail, but his family is counting on him to be the “football hero” and bring recognition to their tribe.  He’s stuck between a rock and a hard place.

Then he meets Dennis, who is assigned to do a promotion for Raven’s tribe casino.  Dennis has a bad reputation for outing people’s secrets and he is most definitely not gay.  But Raven can’t help his attraction to the white boy, even if that’s another thing that goes against what his family expects from him. 😉

This could’ve been a pretty clean cut story just leaving it at that, but then there’s Dennis’s backstory added in and the reason WHY he’s been doing the things he’s done.  I’ll admit at first I was put off by Dennis because let’s face it… he’s a jerk.  We’ve known this from book one.  So I was glad to see there was a reason behind it, even if it was a bit far-fetched at times.

You know what I love about reading a Tara Lain book?  It’s always fun and in many ways, maybe even a little over the top and just out of the realm of believable.  But that’s how I like it.  There’s always good chemistry between the characters and TACKLING THE TIGHT END was no different.  Dennis and Raven were sexy, especially as Dennis had to be eased into exploring that attraction.  In the end, everything was wrapped up a little too neatly with all issues clearly resolved after one major conflict.  A bit too easy for me, being that there were so many factors that still should’ve been addressed instead of everyone being ok with all of it.

Nonetheless, this was fun to read and definitely a fast one.  I’m looking forward to see what’s next by Tara Lain.

sometimes you just need something a bit out of the believable realm…however, the jerk and the neat and tidy ending are a put off…thank you

Thanks for the review, I have this series on my wishlist after reading a review on UTC of a previous book in the series.