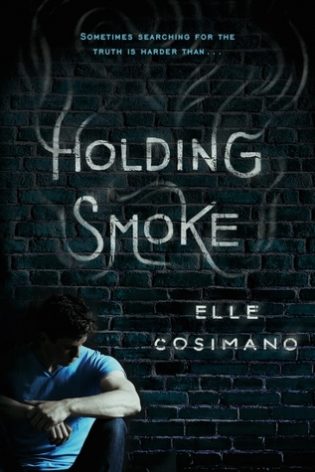 I am not normally a fan of Young Adult, it isn’t that I avoid it, it’s just that when I read the blurb it doesn’t tend to capture my attention. However, the combination of the intriguing blurb and fantastic cover of Elle Cosimano’s Holding Smoke had me eagerly waiting its arrival on my kindle. It tells the tale of John “Smoke” Conlan who has been wrongly jailed for murder. But, he has the unusual ability that allows his spirit to leave his body and roam the world. Which, is a talent he uses to his advantage to get an advantage whilst locked up.

It can sometimes be the case that a good cover and a well written blurb can mislead you about the contents, I am pleased to say I found this wasn’t the case with Holding Smoke. It managed to grip me from beginning to end and had me immediately looking up Elle Cosimano for more of her books.

What I really liked about Holding Smoke was John’s character from whom’s POV the story was told from. He hasn’t had an easy life, in fact life has pretty much beat the shit out of him and landed him behind bars. And yet, unlike other heroes, of which there are many, he doesn’t turn in to angsty, broody mess, or atleast he does it just enough to be attractive and not slap-worthy. This book was centred around the mystery of the murder that John had supposedly committed and with the aid of Pink, a girl John used to go to school with, they manage to uncover the truth.

Admittedly, the truth wasn’t that hard to figure out once you got a few of the facts, which is pretty much the only reason why this book hasn’t got 5 stars. The interesting parts of the book was John’s interactions in the Y (the facility he was kept in) and the friendships, as well as enemies, that he had there. I would also have liked to have seen more of Pink and John, I would liked her to have been a stronger presence in the book, although admittedly that may have been hard to achieve given their physical locations.

If you’re looking for a YA mystery with a hint of paranormal and a romance then you need to pick this up. Actually scratch that, I recommend you give this book a try no matter what genre you are looking for, it’s a fantastic read that will keep you interested until the end.