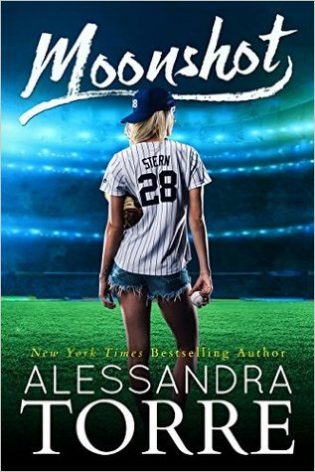 “Fans of forbidden romance with sizzling sex and a dash of suspense will enjoy this twisty ride.”
~ Under the Covers

Boy!  What a rollercoaster of emotions this book put me through.  And I don’t mean emotions about the story itself but how it made me feel.  See, at first I was hooked because I absolutely adored the sweet, young heroine, Tyler. She’s the daughter of a baseball legend and has grown up in the field and on the road with her father for most of her life.  Yeah, she’s a bit of a tomboy.  She’s a little sheltered in her view of the world.  And she’s obsessed with baseball.  She lives it and breathes it.  And Yankee Stadium is her home.

Then comes cocky player Chase Stern, with a string of bad encounters with women and questionable morals, but a talent nonetheless, and she’s smitten.  Not smitten enough that she’s not able to hold her own in his presence.  And that is like catnip for Chase.  Now I’ll stop here because this is where some of my emotions started going up and down.  I wasn’t a fan of the initial relationship happening in secret and while she was so young.  I would’ve loved to have seen this happen a few years later. So I struggled with that acceptance.

I won’t spoil what happens because this story is packed with twists and turns on the road to the HEA between Tyler and Chase that you should experience without any previous hints.  But let’s just say my mood and enjoyment kept going up and down because of the choices of the characters after they are thrown back together.  Things that are so out of moral character for what I thought of Tyler especially. So while I enjoyed it, and I liked both of them individually and together, there was also something in the back of my mind screaming “NOOOOOO.  Whyyyyyyyy? Why like this??”

In the midst of their torrid affair there is a series of murders that are plaguing the Yankees that need to be stopped.  This suspense element is quite small really until we get to the very end.  I was hoping for it to be a bigger presence throughout the book.  In the end, I was actually surprised with the killer’s identity, and the more surprising fact was that I didn’t pick up on it being SO OBVIOUS throughout the book.   I’m losing my touch! 😉

Fans of forbidden romance with sizzling sex and a dash of suspense will enjoy this twisty ride.

“In the end, I was actually surprised with the killer’s identity, and the more surprising fact was that I didn’t pick up on it being SO OBVIOUS throughout the book. I’m losing my touch!” This pretty much sums up exactly how I felt too!

Thanks for the review, not a big fan of cheating so I’ll probably skip this one.