Welcome to Under the Covers, Lilah! We enjoyed your Asking for It duology and since finishing that, you’ve started a new one called His Royal Secret. This is definitely a bit different than Jonah and Vivienne’s story so what can you tell us about the series?

It’s the story of James, Prince of Wales (in an entirely fictional, slightly alt-history version of Britain), who’s hiding the fact that he’s gay. He’d like to come out—but if he’s forced from the succession as a result, the crown falls on his younger sister, who struggles with untreated mental illness. She can’t take on that burden. So James thinks he’s stuck in the closet forever. It’s also the story of Benjamin Dahan, a globetrotting journalist who prefers a solitary existence, which he thinks of as freedom. He’s had experiences in the past that made him cynical, but that readers might recognize as being, perhaps, more traumatic than Ben’s willing to face. When these two meet, the chemistry is immediate, and electric. Each of them wants a relationship that fits very neatly into definite limits. Their clandestine affair seems like everything they’ve ever wanted. But the heart isn’t so easily contained…

We love M/M Romance here at UTC! What drew you to writing M/M?

Emotionally, it doesn’t feel very different to me—it’s about the pull between two people, that irresistible chemistry turning into a deeper and more profound connection. How much does it matter if they’re heterosexual or homosexual? If the love story is there, and the heat, that’s what matters most.

I would however be lying if I didn’t say that, on a more shallow level, I also believe that if one hot man is good, two hot men might be even better.

Do you have some favorite authors in the genre you enjoy reading?

Anna Zabo, for sure!

What’s your favorite thing about James? And about Benjamin?

With James, I love looking at how his upbringing has affected his inner emotional life. He’s had to become so good at compartmentalizing, at putting aside his deeper feelings when he has to, that he almost never prioritizes what he most wants, deep down. In the story, James has to learn to fight for what he wants-but even more importantly, to admit what he wants, not only to the world but also just to himself.

As for Ben, I’m fascinated by the way he thinks he lives a life of freedom, when in fact he confines himself so tightly. He thinks he can have whatever he wants, whenever he wants, but he’ starving something deep inside. And he thinks he’s all but invulnerable, while we see how damaged he is inside. Best of all, he thinks he can read James like a book and remain closed off and secret. Really James sees more than anyone else ever has.

What would you say was the hardest part about writing this book?

Trying to create a believable zone of privacy for James. The only way to do that was to make it clear that he has far fewer servants, and is much more self-sufficient, than the average royal. Now, that’s not unrealistic—Princess Anne of the real royal family is famous for living this way—but it requires some setup. James not only had to lead that kind of life, but he also needed believable reasons to prefer it.

We love books that come with fun warning labels 😉 What would it be for HIS ROYAL SECRET?

And now let’s dig in a bit more personal, shall we? Tell us 5 things about yourself that others may not know.

1) The last time I cried was last week, while watching the movie “Sounder.”

2) Everyone in my extended family has seen a ghost except me, dang it.

3) I think the song “Moon River” is almost unbearably melancholy, and yet I love it.

4) I have recurring dreams about excavating an archaeological site from the Roman Empire.

What could we find you doing if you’re not writing?

Thrifting for clothes or house décor. Reading. Obsessively pinning stuff on Pinterest. Planning my next trip. Hanging out around my friends’ pool to beat the summer heat.

What are you currently reading or recently finished?

Liane Moriarty has a new book coming soon, so I’m rereading her other works right now in a sort of anticipatory frenzy. She’s so good, on so many different levels. And I can’t wait to dig into HIM by Elle Kennedy and Sarina Bowen.

What’s next for Lilah Pace?

In August, the story of James and Ben concludes in HIS ROYAL FAVORITE. Around that time, my editor will get pitches for two more M/F romances and one more M/M. After that, it’s up to her!

The first in an enchanting new male/male romantic duology from Lilah Pace, author of Asking for More and Begging for It ....

James, the handsome, cosmopolitan Prince of Wales, is used to being in the public eye. But he's keeping a king-sized secret...James, next in line for the throne, is gay.

He’s been able to hide his sexual orientation with the help of his best friend and beard, Lady Cassandra. Sometimes he feels like a coward for not coming out, but he daren’t risk losing the crown. If he did, the succession would fall on his deeply troubled younger sister, Princess Amelia. To protect her, James is willing to live a lie.

While on holiday, he meets Benjamin Dahan—a rugged international reporter with a globe-trotting, unattached life—who catches far more than James's eye. And when Ben is transferred to London, it seems fate may finally be smiling on James.

But what began as a torrid fling grows into something far more intimate and powerful. Soon James will have decide who he is, what he wants from life and love, and what he’s willing to sacrifice for the truth... 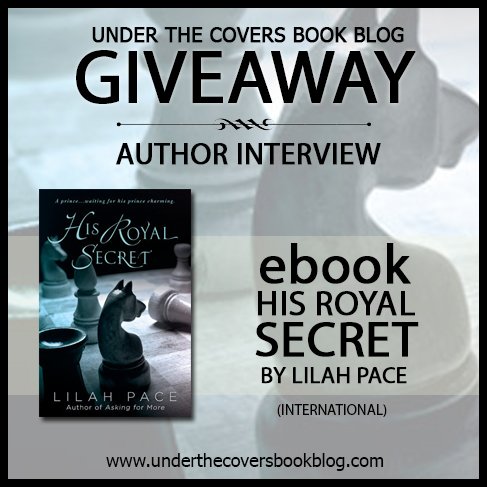 The premise of this book is intriguing..looking forward to reading this

Thanks for the post, this book is on my wishlist.

Great interview! Thanks for the giveaway

I am so excited to read these; thanks for the interview!

Thank you for the post! The books looks great =)

I enjoyed the interview thank you.

This sounds amazing and i totally cant wait to read this !!

I can’t wait to read more. Thank you so much for sharing!

I have been intrigued with this book ever since it was announced! Thank you for the giveaway chance.

Royal family? And a relationship dilemma? Count me in. Great interview, UTC!