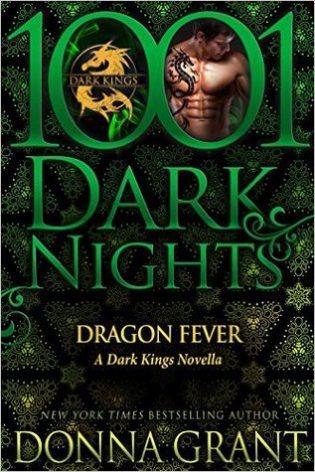 “Grant does a good job of solidifying their romance.”
~ Under the Covers

DRAGON FEVER is a novella set in the Dark Kings would. If you haven’t read this series yet, I would suggest starting from the beginning. Since this book takes place quite deeper into the timeline already, I think new readers would be lost and probably wouldn’t appreciate the story than someone who has read from the beginning.

That being said, DRAGON FEVER explores some of the consequences of the events in the series so far. So far the Dark Kings have managed to stay relatively hidden but that has become increasingly difficult as the books continue. Now a journalist by the name of Rachel Marek is interested in getting the truth and will do nothing to get it. So she seduces Asher who is a Dragon King. However, what she doesn’t know is that Asher knows who she is and is also playing a game with her.

Since this is a novella, things do move at a very quick pace, which I think was a downfall for this story. Because we know that Rachel is a journalist and is seeking answers, I found that I didn’t really trust her very much.

I felt much more connected to Asher. He has an old soul and was very easy to like. But because we know things that Asher doesn’t, Rae’s tricks kind of hindered the romance a bit. I didn’t quite believe it than if she wasn’t a journalist and trying to fool Asher. In the end, however, I do think that Grant does a good job of solidifying their romance.

It had been so easy to gain Asher’s attention. Then again, she had dressed the part. Though Rachel hadn’t expected such an immediate interaction with him, she was still pleased. She’d guessed right in what would draw his attention.

“Good evening,” he said in a smooth, deep brogue that she wanted to hate but couldn’t.

“Is that a problem?”

He was quick to shake his head. “No’ at all. I’ve several close friends who are married to Americans. I’m Asher, by the way.”

She took his hand. His long fingers tenderly wrapped around hers as his Scottish brogue fell from his lips. “Rae.”

“A curiously male name for a verra feminine woman.”

“It’s a nickname.” It was a trick of any good undercover journalist worth their salt to remain close to the truth in any scenario. Sharing an old nickname allowed her to use something other than her name, but still answer to it because she knew it.

“And your real name?”

She smiled flirtatiously. “That I save for those I deem worthy.”

One side of his lips lifted in a shockingly seductive grin. He leaned back in his chair casually, those bright green eyes of his studying her, as if by staring he might be able to see all the secrets she kept hidden away.

Rachel found herself gazing into his eyes. Never had she seen eyes such a dazzling green before. Even if she hadn’t known he was an immortal and a Dragon King, the truth of who he was blazed in those eyes of his.

“Your smile is fading. Why?” he asked, a small frown forming.

“Do you believe you can see a person’s soul in their eyes?”

Thanks for the review, I have some of these on my TBR pile.