We have a special treat for everyone today!  I’m sure you’re as excited as we are about the release of THE CURSE OF TENTH GRAVE, so we tracked down Darynda Jones and bugged her with questions.  So without any further delay… let’s hear it straight from the source. 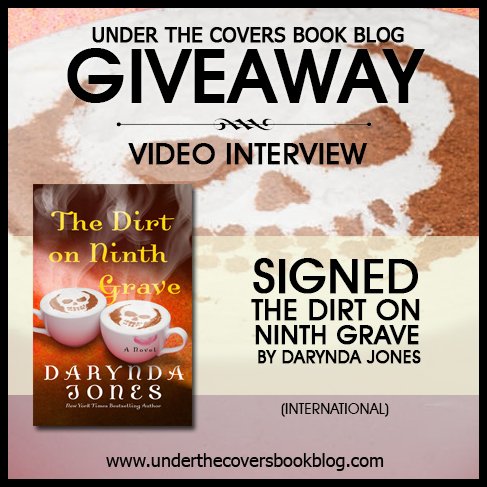 💜💚❤️💙 Darynda Jones! Her Charley Davidson books are some of my absolute favorites and the chapter quotes are always good for a laugh. Thanks for this awesome interview!

I’d love to go into the Fever world too just for Barrons as well!

Great interview! I loved hearing all your thoughts about the series!

What a treat! I enjoyed the video interview. This is a fun blog to visit, Darynda. Oh and I need to read that White Trash Zombie series soon-ish. Mercy is a fav of mine, too.

I love getting all the insight into the new book. Fun to learn more about Reyes and see him and Charley sort it all out after the last book.

I agree with Darynda and this site is one of my favorites as well.
Great interview. Nice finding out what she reads :).

I loved this interview, so much fun. We have the exact same taste in books, too. Can’t wait to read this one, love the series.

Such a fun video. I loved hearing her gush not only of her book but of others too. Total fan girl!

I love Darynda Jones! Without her there would be no Reyes

I love Darynda! She’s amazing! And I love Reyes and Charlie! This series is in my top 5 all time faves!

Dude! I love video interviews! We get to see and hear the author instead of just reading. Darynda is just so adorable and sweet. I can’t wait to see her in a couple weeks!

Great interview . Love all those books . Going to check out some books . Thank you for the chance .

I’m in love with the covers of this series. Thank you for the giveaway.

Love this series. Darynda your ‘comedic humor’ one liners and t-shirt memes are fabulous. Thanks for the giveaway.