Nine Things That Are True In Backfire

Perhaps you’ve read a book before and wondered how much of the story was based on elements of the author’s real life.

In my books?  A lot of what I write is based on something I’ve experienced.  If you’ve read my books, that’s probably a frightening thought, but here’s a list of nine real life details that inspired my newly released romantic suspense, Backfire:

I feel very fortunate to be surrounded by some amazing women in my life, so many of the female leads that I write are based on people I know.  In the case of Lucia (or Lucy), she’s inspired, in part, by my sister-in-law, Lucy, who’s originally from Slovakia, and was my go-to person for Slovak culture, language and food.  She has a fascinating background that kept me riveted for hours when we chatted about where she grew up, one that I may be exploring in more depth for a future book titled, Lunik IX.

The female lead is also inspired by my younger sister, Lisa, a very talented photographer who likes to venture into some run down parts of Detroit.  I describe some of my inspiration at the beginning of Backfire, and my appreciation for urbex photography that began a few years back when she showed me some pictures she’d taken of the abandoned Packard Plant.  So many stories have evolved from those dark and ruined images, and I’ve been referencing her photography for my writing ever since.

The abandonment of Detroit

Sadly, the places and buildings I describe in the book are real, though I do take some license in the details (for example, I’ve never personally climbed the fire escape of Book or Broderick Tower, but I can imagine its pretty damn harrowing).  It’s the strangest thing sometimes, to see the downtown area so filled with activity and life, pocked with these enormous skyscrapers that have been gutted and destroyed on the inside.  When you venture further out, the abandonment becomes obvious in the husks of empty houses that often remind me of a cornfield after harvest.

The female lead has some pretty weird quirks, and as strange as they may seem, they’re totally real—because they happen to be my quirks. Like Lucia, I can’t sleep unless my face is covered and this often freaks my husband out.  In my case though, it IS about spiders.  I read that little factoid about the average human swallowing so many spiders a year back when I was young, and I’ve slept with my face covered ever since.  I also bite my lip when I’m stressed, I play with my hair when I’m deep in thought, I cannot drink a bottle of water if it’s already been opened and I need to HEAR the pop of it opening.  I can’t climb into a bed where the sheets aren’t tucked right, and I obsessively check things like stove knobs and door locks before bed.  I also slept for years with a hunting blade tucked beneath my pillow (based on a scary experience a while back), so Lucia and I have that in common as well.

I’ve gotten a couple of emails (mostly from those outside of the US), asking if Devil’s Night is real in Detroit.  Though it’s calmed down quite a bit in recent years, yes, it still happens every year.  Back when I was a teenager, my mother refused to let me do anything on Devil’s Night, no matter how benign an activity (like going to a friend’s house to hang out) or how early in the evening, just based on the crazy things that went down.

The scene in the book when Lucia’s father accidentally slices off his finger is based on my own father slicing off his.  My dad was always working out of his garage when I was growing up, whether on cars, or just building and tinkering.  Our garage door wasn’t the roll-up type, it was a swing door, so one day, my dad yanked it shut, not realizing the hood of his car was sticking out just enough to smash his finger between the hood and the door.  He had to have the tip of his finger sewn back on, but the first hospital he visited did such a poor job of sewing it, he actually had it resewn that same day at another hospital! At a young age, that was the most horrific thing I’d ever heard, and I remember thinking how indestructible and tough my dad must’ve been to endure such a painful injury.

In many of my books, the males rarely drive newer model cars.  Most of them drive old muscle cars, which is also based on my father, who fixes up classic cars as a hobby. My dad used to drive his cars in the Woodward Dream Cruise every year when I was younger.

My grandmother was a very devout Catholic and one of the things I remember about her is that she always had a rosary wrapped around her palm and wore a cluster of saints around her neck, just like Maria in the book.  She once bought a gold Saint Christopher necklace for me that I wore for many years.

Jase’s love for the stray dog he adopts in his flashbacks comes from my own childhood.  There was a pitbull that often ventured into our yard to play and a hulking Bullmastiff, named Francois, that seemed to love the attention my siblings and I would shower upon him whenever he’d visit us.  Any time a dog would wander the neighborhood, I’d beg my parents to let me keep it, until eventually, they allowed me to take one of my aunt’s beautiful black lab puppies that I named Shadow. 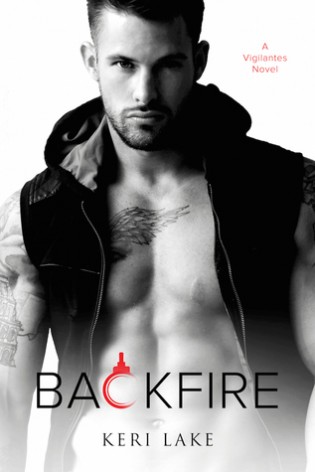 No matter how unbreakable he may seem, every man has a weakness.

A year ago, my home became a bloodstained crime scene. That night marked the beginning of my hell—the same night I was tortured by my enemies and tossed into an underground prison to die.

They failed. I survived.

Now that I’m free, only one motive burns in my soul: revenge.

Lucky for me, they think Jase Hawkins is dead. Maybe I am. I’ve got nothing but a cold, merciless rage, and Black Betty, the sharp steel blade that never leaves my side.

Then she drifts into my life.

Lucia wants answers—so much so, she’s willing to fall into the darkness where my enemies lie in wait, to kill her for what she knows.

Or to take her for the depraved fantasies her body alone can rouse in a man’s mind.

Me? I want her for the fire in her touch that feeds my addiction, forces me to feel what has become numb, but my appetite for bloodshed runs deeper than flesh.

For my own sanity, I’ve vowed to stay away from her. Because she’s my only weakness, an obsession that leaves me craving more—one that could make even the most steadfast plan backfire.

I loved reading these truths about Backfire! Thanks for sharing!

Great interview! So much insight, I loved it. Shelved on Goodreads.

Thanks for the background info, it’s fun to know where authors come up with ideas and things in their books.