In a compelling, richly researched novel that draws from thousands of letters and original sources, bestselling authors Stephanie Dray and Laura Kamoie tell the fascinating, untold story of Thomas Jefferson’s eldest daughter, Martha “Patsy” Jefferson Randolph—a woman who kept the secrets of our most enigmatic founding father and shaped an American legacy.

From her earliest days, Martha "Patsy" Jefferson knows that though her father loves his family dearly, his devotion to his country runs deeper still. As Thomas Jefferson’s oldest daughter, she becomes his helpmate in the wake of her mother’s death, traveling with him when he becomes American minister to France. And it is in Paris, at the glittering court and among the first tumultuous days of revolution, that she learns of her father’s liaison with Sally Hemings, a slave girl her own age.

Patsy too has fallen in love—with her father’s protégé, William Short, a staunch abolitionist intent on a career in Europe. Heartbroken at having to decide between being William’s wife or a devoted daughter, she returns to Virginia with her father and marries a man of his choosing, raising eleven children of her own.

Yet as family secrets come to light during her father's presidency, Patsy must again decide how much she will sacrifice to protect his reputation, in the process defining not just Jefferson’s political legacy, but that of the nation he founded.

Laura Kamoie has always been fascinated by the people, stories, and physical presence of the past, which led her to a lifetime of historical and archaeological study and training. She holds a doctoral degree in early American history from The College of William and Mary, published two non-fiction books on early America, and most recently held the position of Associate Professor of History at the U.S. Naval Academy before transitioning to a full-time career writing genre fiction as the New York Times bestselling author, Laura Kaye. Her debut historical novel, America's First Daughter (March 1, 2016), co-authored with Stephanie Dray, allowed her the exciting opportunity to combine her love of history with her passion for storytelling. Laura lives among the colonial charm of Annapolis, Maryland with her husband and two daughters.

STEPHANIE DRAY is an award-winning, bestselling and two-time RITA award nominated author of historical women’s fiction. Her critically acclaimed series about Cleopatra’s daughter has been translated into more than eight different languages and won the Golden Leaf. Her focus on Ptolemaic Egypt and Augustan Age Rome has given her a unique perspective on the consequences of Egypt’s ancient clash with Rome, both in terms of the still-extant tensions between East and West as well as the worldwide decline of female-oriented religion. She’s also fascinated by the founding of the American Republic and its roots in ancient Rome. It’s her mission to illuminate the stories of women in history and inspire the young women of today. 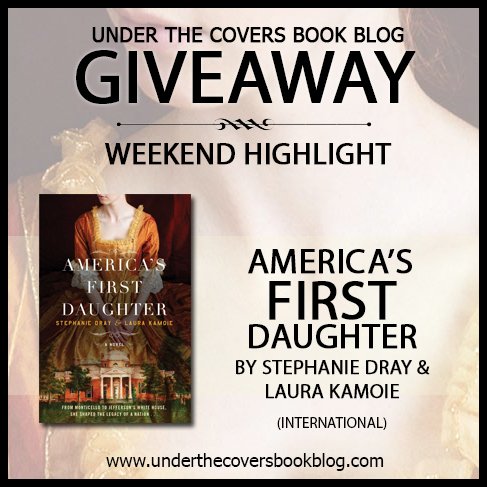 Under the Covers Book Blog
Admin
Reply to  Betul E.

Thanks for passing by Betul!

I have this on my TBR list. It really looks good :).

Under the Covers Book Blog
Admin
Reply to  Viki S.

It will be worth your time Viki!

Great review . Thank you for the chance .

Under the Covers Book Blog
Admin
Reply to  Esther Gerdzen

Esther Gerdzen
Reply to  Under the Covers Book Blog

I got this at RT! It sounds amazing. Thank you for the review, Angela!

Thanks Darynda! Dray and Kamoie did really good on this one.

Thank you for the review, sounds great.

I have this on my TBR list on Goodreads. I love all of Laura’s books, but I am sorry to say I am not familiar with Stephanie’s. I look forward to reading. Thank You

The is awesome. I had my boys read it for history. They enjoyed so much that they researched many of the people. Best history lessons ever!!!

I really like Laura Kamoie’s work as Laura Kaye so I’m intrigued with this book.

So intriguing. Definitely a book to look forward for in the future.

Love the review! Thanks for posting.

Sounds really good, thank you for the chance!!!!!