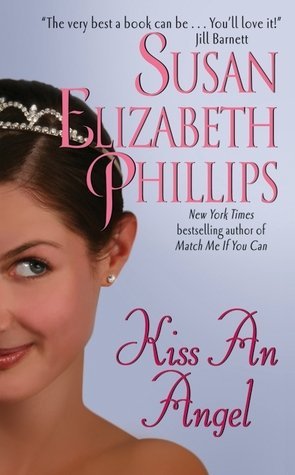 “The story itself was a fairly standard one, but the setting and SEP’s fantastic writing is what sets Kiss An Angel apart from other books in this genre”
~ Under the Covers

Daisy Devereaux has two choices, marry the man her father picks out for her…or go to jail. Now, she is at the alter and can’t quite remember her groom’s name. But, despite a rocky start, she’s determined to make something out of this marriage, even if her handsome yet grim new husband thinks she is flighty and useless.

There’s just something about Susan Elizabeth Phillips. She has a magical way with words, which I have found are perfect for two things:

This may seems like trivial things, but as anyone in the midst of a book funk will tell you, it’s priceless. However, even when I am in a voracious book mood these book never fail to please, like I said, there’s just something about SEP. She manages to mix the ridiculous, with the emotional and romantic and create something special, which is exactly what she has done with Kiss An Angel.

Normally, I don’t have much sympathy with poor little rich boy/girls when I am reading, however, there is just something so charming about Daisy. Life throws obstacle after obstacle at her, and yet she soldiers on with a smile on her face, it’s impossible not to fall in love with that kind of heroine. As for Alex, our hero, I grew to like him as well, but I didn’t find him quite as memorable as Daisy. I did like them together though, it was a case of opposites attract, Daisy was outgoing and cheerful and Alex was a little storm cloud *ahem* I mean a broody male. Together though, they had a lot of chemistry, he bullied the bravery and guts out of her, and she brought in the laughter and fun.  It was an odd combination, and yet it worked beautifully.

The setting in this was unique as well as Alex drags Daisy to a travelling circus where she, with her phobia of animals, is left in charge of the baby elephants…and a tiger. It seems strange, and unlikely, which it is, and yet it was all part of Daisy’s characters growth and I found myself looking forward to her interactions with the animals just as much as the romance in the novel.

The story itself was a fairly standard one, but the setting and SEP’s fantastic writing is what sets Kiss An Angel apart from other books in this genre. So, if you are after a book that’s going to leave you with a smile on your face (and the urge to adopt a baby elephant) then you need to pick this up immediately. 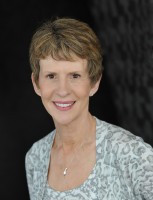 The Huffington Post says the books of Susan Elizabeth Phillips provide a “gateway drug to the whole [romance] genre,” which she assumes is a good thing. Bookpage magazine calls her “the crown jewel of romantic comedy writers,” which is definitely a good thing. Since she wrote her first novel on a typewriter in her kitchen, her books have been published in over 30 languages and appear on bestseller lists all over the world.
In addition to being a New York Times, Publisher’s Weekly, and USA Today bestseller, she is a hiker, lazy gardener, horrible singer, passable cook, passionate reader, wife, mother of two grown sons, and grandmother of two adorable little ones. Her newest book, THE GREAT ESCAPE, is now available in hardback and will be released in trade paperback in April 2013. You can visit Susan on Facebook or on her website, where she’s added a special Members Only Lounge.

I like the sound of this…thanks for the review Suzanne

This was the first ever SEP book I read and it will always have a special place in my heart. The elephant! The tiger! I loved Daisy’s growth too, she really changed from beginning to end. Great review!

If you have a chance, listen to the audiobook of Kiss An Angel. Anna Fields is the narrator and did amazing work with SEP’s books.

Anna Fields was the best. She was magnificent narrating Match Me If You Can and Natural Born Charmer. She is sorely missed. I’ll look for KAA in audio.

Loved the review! I, too, am a fan of SEP. She’s great for getting the heart involved.

This is one of my favorite SEP books, right up there with Match Me If You Can and Natural Born Charmer. SEP is always the correct answer, no matter the question.

Thanks for the review, I really enjoyed this book.