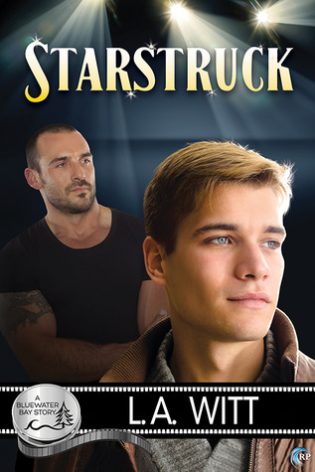 “If you’re in the mood for something a little different, something with a well-balanced combination of small town and Hollywood, this is a great series to try and I highly recommend STARSTRUCK.”
~ Under the Covers

STARSTRUCK is the first book in the Bluewater Bay series and I absolutely love the idea of this series. Each book is written by an amazing author but the stories are all set in Bluewater Bay, a small logging town on Washington state’s Olymic Peninsula.

This book is about Levi Pritchard, a retired action star who has been type-casted like nearly every other actor in Hollywood. His good friend is the director of this new series called Wolf’s Landing and she’s hoping Levi still come out of retirement to take on this role. Levi has a lot to consider since he’s completely over being seen as a glorified stuntman, but then he finds out that the male lead of the series is Carter Samuels, a man who Levi has admired and secretly coveted for a long time.

Now, Levi must decide if he wants to participate in this series, but the biggest thing standing in the way is his worries that he may not be able to resist his co-star if he takes the role on.

I’m a big fan of L.A. Witt’s writing style. She is always able to bring her characters to life so well. I especially loved Levi in this one. Right from the first chapter you’re able to really relate to him and his reservations about Hollywood and acting. He’s very down to earth and I loved his personal conflict as a character. Instead of just making this your typical closeted Hollywood star story, Witt is able to add more depth to Levi in a way that makes him unique and stand out.

Similarly, Carter is just as endearing and sweet. As the slightly more successful actor of the two, I worried that he would be unrelatable, but he’s just as down to earth and sweet as Levi is. I loved how they were able to connect over their jobs. Their romance comes across as very genuine and believable. I absolutely loved them together.

If you’re in the mood for something a little different, something with a well-balanced combination of small town and Hollywood, this is a great series to try and I highly recommend STARSTRUCK.

Sounds good. Thanks for the rec Annie

This is an absolutely wonderful series. I have loved every book I have read. I adore Bluewater Bay and would love to live there. I try and visit every time a new book comes out. Each of the authors who contribute have done well with this charming community as well as providing us with wonderful stories.

Under the Covers Book Blog
Admin
Reply to  Pansy Petal

I agree! Each book is so individual but they all have the same quirks that make Bluewater Bay so memorable!

I enjoyed this one, too. I loved how these guys just hung out and started as friends connecting over old movies, the cats, shared meals, and stuff.

LOL, cats! That’s exactly it! The romance just bloomed beautifully in this one.

Yes, you must! She’s one of my fave M/M authors!

Thanks for the review, this sounds like something I’d enjoy.

I hope you try it!