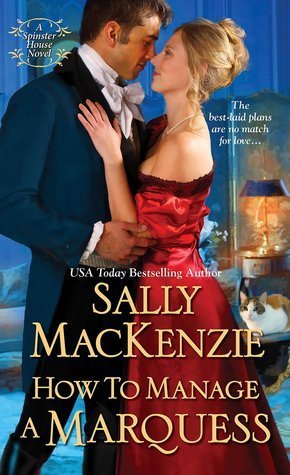 How to Manage a Marquess
by Sally MacKenzie

“… it was all just a bit lacklustre.”
~ Under the Covers

The saga with the Spinster House continues with Anne Davenport, another young lady who wants a chance to move in and leave the worries of her home behind her. Namely that her father is planning to marry a woman younger than she is. However, it doesn’t quite pan out as expected, when one of her closest friends gets the house, the subsequently falls in love with the Duke of Hart. All she needs is a little push from her friend to commit and marry…and then move out of the Spinster House, leaving it vacant for Anne. Her plan falls in complete opposition to what the Duke’s best friend and cousin, Nate, Marquess of Haywood has in mind and, as they battle it out their passion flares as well as their tempers.

I wasn’t a massive fan of the first book in this series, but it left me curious enough to want to read the next book to see what happens. And, although I did like this book slightly more, it still left me unmoved. I wasn’t sure if it was the romance, the characters or the idea itself, but I had a hard time keeping my mind focused on this book whilst I was reading.

Maybe part of the problem was that I wasn’t a massive fan of the main characters, Anne was okay, but she was scheming behind her friends back so that she could get she wanted, which, fortunately did coincide with her friend’s happiness. But it still felt underhanded. But, she was in a difficult position and on a more serious note, options were extremely limited for young women at that point in time. Then there was Nate, and it wasn’t that I disliked anything about him, it’s just that I didn’t particularly like anything about him either, it was all just a bit lacklustre. Which, unfortunately extended to the romance as well.

I’m not going to say too much more, as you can see I wasn’t a massive fan, but there was also nothing inherently wrong with this book, I just didn’t connect with it. I’m not sure if I will read on with this series as I had the same problem with the first book, but I wouldn’t rule it out if the blurb intrigued me enough. Oh well, you can’t like them all right?

USA Today bestselling author Sally MacKenzie writes funny, sexy romances set in her favorite time period (other than the present): Regency England. Her novella, “The Duchess of Love,” was a 2013 RITA® finalist, and two of her books—The Naked King and Bedding Lord Ned—made ALA Booklist’s top ten romances for their respective years. Many of her books are available in audio format, and her stories have been translated into Czech, French, Indonesian, Japanese, Norwegian, Portuguese, Romanian, Russian, Spanish, and Turkish.

A native of Washington, D. C., she lives with her husband in suburban Maryland, not far from her childhood home.

I almost bought this today… glad I didn’t