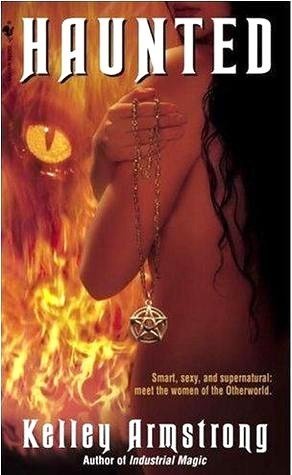 Released: May 31st 2005
Series: Women of the Otherworld #5
Published by Bantam
Format: Paperback

“This was a great book, both the main characters had all the traits of an evil villain, but it was turned on its head and they ended up the heroes of the piece”
~ Under the Covers

We have come to book five in the Women of the Otherworld series and Armstrong has now shifted her focus to Eve Levine, the half demon black witch who seems to scare the hell out of everyone…even after she has died. Of course, the afterlife isn’t exactly what Eve expected, but it isn’t so bad, especially as she can watch over her daughter Savannah, even if she can’t do anything. But, the Fates have a task for her, capture the demi demon Nix that is wreaking havoc on the human world, but angels have already tried and failed at capturing the Nix, but then angels never play dirty…

I admit, I wasn’t too excited to be starting this book, mainly because I wasn’t that excited about Eve. She is mentioned in passing and she is important in that her existence has affected the way Savannah is treated, but she is dead right? How exciting could her story be? Well, I should have known not to doubt Kelley Armstrong because I loved this book; it was an exciting and interesting read that once again added a new dimension to the world that Armstrong is building.

I didn’t know what to expect from Eve, she has a scary reputation as a black witch and so I was worried that I wouldn’t like her, that wasn’t the case however. She was just more edgey and ruthless with a willingness to get her hands dirty to get the job done, definitely a different kind of character and witch to Paige, but I ended the book really liking Eve. We also get to meet Kristof Nast, Eve’s former lover and Savannah’s dad. The name should sound familiar as he is the guy who died at the end of Dime Store Magic. Eve and Kristof are now reunited through their deaths, which added some romance to this story. It also allowed you to see a different side to Kristof, Cabal sorcerer he may be, but like Eve, he isn’t all bad.

I also enjoyed their hunt for the Nix, the nasty demi demon that is causing so much mayhem, it made an exciting and action packed story as Eve tracks her down and tries to find a way to stop her. Armstrong is really great and crafting an interesting plot that manages to reel you in, I was glued to the page as I couldn’t wait to see what would happen next.

This was a great book, both the main characters had all the traits of an evil villain, but it was turned on its head and they ended up the heroes of the piece. It was a fantastic idea. Once again I am left eager to start the next book in the series and so I can see what Armstrong has in store for me next.

Told ya you’d like Haunted. 😉 Did you go to Kelley’s website, under “extras”, to download the complete reading order? At this point the short story Wedding Bell Hell (in Tales of the Otherworld) should have been read between Industrial Magic and Haunted, which is story #21 so far. Some stories are in Tales of the Otherworld, Men of the Otherworld, online freebies, or novels. Don’t miss out by only reading the novels! Next in line is an online story called Adventurer, the novella Chaotic, online Bargain, THEN the novel Broken. You’ll see that the series does NOT end with… Read more »

Under the Covers Book Blog
Admin
Reply to  nihcki

You were right, I definitely liked Haunted, in fact I love all the books in this series so far.

I have! Man, there are a lot of novellas! I haven’t read any of them though, I am going to make my way through the main books and then read back through the novellas. I think I will be diving in and out of the Otherworld for a while! Which, I am please about, this series is so good.

Yes…I loved getting to know more about eve and kristoff