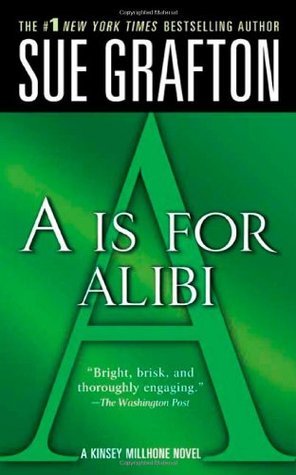 A is for Alibi
by Sue Grafton

“Kinsey is a strong, independent woman – and I really want to stress the independent part. She doesn’t need anyone to do her job well and I really like that in a character. It makes me happy to see a female author write such strong heroines.”
~ Under the Covers

I picked up this book on a whim. Mainly because the titles stuck out to me. The Kinsey Millhone series, or more famously known as the alphabet mysteries, follows a private investigator as she solves a bunch of cases. In A IS FOR ALIBI begins when the wife of a divorce lawyer is finally released from jail after 8 years paying for a crime she claims she did not commit. She has come to Kinsey for help to try and find the real murderer.

The series takes place in a fictional California town of Santa Teresa. This book was actually initially released in 1982. I wasn’t even born yet so part of the allure of this book and reading about all the things that happened then. It’s a book that stands out to me because Kinsey doesn’t have the tools that PI books written now have. She must rely on her instinct and manual research to come to a conclusion and I enjoyed watching how she worked.

Kinsey kind of reminds me of another well-loved character of Mystery books – Eve Dallas. If you’re a fan of the In Death series, you absolutely need to read this series. There is less romance in this series as a whole (although there’s a taste of it in this book), but Kinsey’s drive and tenacity reminds me a lot of Eve. Like Eve, Kinsey is a strong, independent woman – and I really want to stress the independent part. She doesn’t need anyone to do her job well and I really like that in a character. It makes me happy to see a female author write such strong heroines.

As my first book by Sue Grafton I have to say how excited I am to have discovered this series. Not only is the alphabet idea so smart but her writing is really stellar. Grafton weaves an intricate story, keeping readers on their toes as Kinsey tries to find a killer. I know most people’s complaint about this book is that Kinsey comes off as emotionless. She drinks frequently and does things that most women would never, ever even think of doing. However, that isn’t a sign of weak characterization to me. In fact, those very things are what most heroines these days are made of. Grafton just anticipated all that and wrote it early on. That’s why the series is still able to go on for as long as it has.

If you haven’t read this series yet, try at least one. I love to listen to the audiobooks whenever I need a refresher. A series like this is a great way to read outside the genre if you’re a Romance buff like me.

Me too! But I can see why it’s so long-standing! It’s fabulous!

[…] It makes me happy to see a female author write such strong heroines.”~ Under the Covers Read full review | Purchase on […]