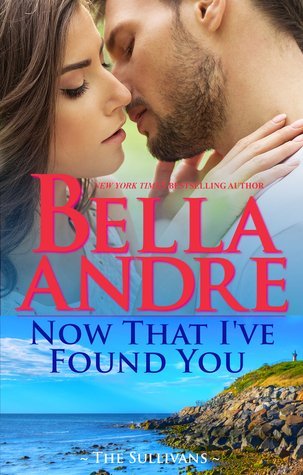 Now That I've Found You
by Bella Andre

“NOW THAT I’VE FOUND YOU is Bella Andre at her finest.”
~ Under the Covers

NOW THAT I’VE FOUND YOU introduces a new set of Sullivans siblings – the New York Sullivans. Up first is Drake Sullivan, the renowned artist who has secluded himself in his Montauk cottage to find his muse.

And he does find her but it’s not in the beauty of the sea or the trees around him. It’s from a woman. Rosa Bouchard seeks solitude in the cliffs when nude photos of herself were splattered all over the internet. As a famous face, now she’ll be known for her scandal than the actual work she has done. She fears her reputation is tarnished and has now become untrustworthy of everyone around her, including her family.

So when Drake appears, stunned by both her beauty and her heart, Rosa is very standoffish. But Drake doesn’t allow that to get to his head. He paints – for the first time in two months his muse is back, but this time he is painting one woman, something that he has never done before.

In this sensual and sweet story, Bella Andre delivers a romantic story filled with heart and heat. As always, Andre pens an impeccable hero in Drake Sullivan. Kind and mysterious, he’s the type of guy you want to get to know. Rosa is one lucky girl for having him.

Since this is the first book in the New York Sullivans set, Andre spends some time introducing some of the new siblings. Suzanne is the one I’m most excited about. She’s very different from the other heroines we’ve had from Andre so I am already on the edge of my seat with anticipation. The other two brothers, Harrison and Alec will also be interesting to read about.

If you haven’t read this series and you’re a little bit intimidated by the sheer number of books in this series, you can definitely start here. But be warned, these books are addicting. Once you get a taste of a Sullivan, you’ll want to collect them all. NOW THAT I’VE FOUND YOU is Bella Andre at her finest.

Welcome to Saturday, can't quite say it's a happy