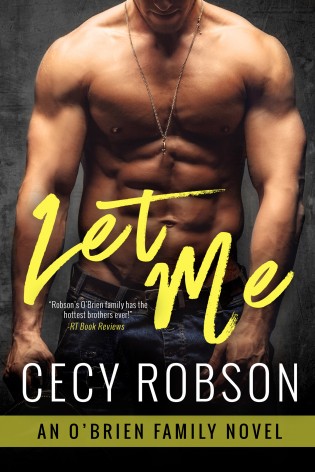 Let Me
by Cecy Robson

“Let Me by Cecy Robson was a fantastic read.  It has equal parts humor, sexy, heartbreak, and romance with a very satisfying ending.  Ms. Robson did not disappoint.”
~ Under the Covers

Let Me by Cecy Robson was a fantastic read.  It has equal parts humor, sexy, heartbreak, and romance with a very satisfying ending.  Ms. Robson did not disappoint.

Finn is ruthless in the ring, known for his short temper, and a ladies man but beneath all that tough persona is a broken man with a past he can’t escape.  But after meeting Sol, Fin realizes with her, he may have a fighting chance in surviving his past.  Sol, on the other hand, has familial problems she shoulders and a relationship with Fin is just not in the cards.  But Finn is sexy, funny and sweet to boot.  Resisting him is futile.

As tough as he may look, Finn is quite the opposite.  Emotionally, Finn is distraught and is now showing in his performance as an MMA fighter.  Finn was so intense, it was hard to see him open up to anyone much less ask for help.  But after a bad incident, Finn is sentenced to seek help for anger management.  By doing so, he meets Sol and his attraction was immediate.  As a reader, you feel that they would be a good fit from the beginning emotionally and sexually.

Finally finding love is not really the problem.  It was obvious that love was there, it’s just that their timing sucked.  Sol has her issues at home and she really has too much on her plate, not to mention her guilt of having a life outside her family problems looms over like a plague.  It was hard for her to juggle everything.  I felt so bad for her and I do understand her hesitation of finding happiness even when it is well deserved and way overdue.

Cecy has a way of breaking her readers and putting them back together.  Reading Fin and Sol’s story broke my heart and the reality of it is that issues like theirs are hard to get over even for a reader like me.  But Cecy did a great job breaking up the intense moment with funny banters, love and even a little bit of sexy scenes.  Yes, Finn is very sexy and adorably sweet! It wasn’t hard to fall in love with him.

The cameos from the rest of the O’Brien family was such a treat.  I love that she is letting her readers get to know them a little more in each installment that comes out.  There was a little bit of setup for Wren’s story and Declan had a set up in Once Kissed.  I’m not quite sure who is next but I’m excited to get more of the O’Brien family. 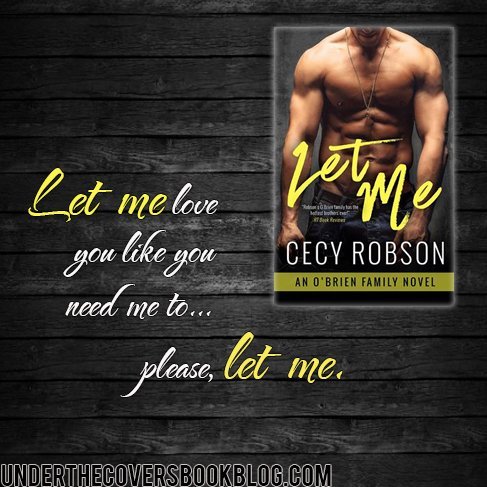 Angela, I so appreciate you taking the time to read, review, and feature LET ME. You have a gift for understanding my characters and peeling back the layers to discover what really lies beneath–whether those emotions are passionate, intense, or heart-breaking. Thank you so much for your amazing insight and for the tremendous demonstration of support (love the graphic!). You honor me!

This sounds awesome!!! Thanks for the review!