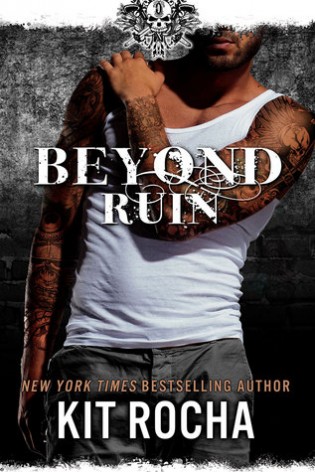 Beyond Ruin
by Kit Rocha

Released: February 23, 2016
Series: Beyond #7
Published by Self Published
Format: eARC

“I had no doubt that Rocha would deliver on the sexiness. ”
~ Under the Covers

BEYOND RUIN was one I was very interested in reading. Kit Rocha has made some very sexy books over the course of the series but I was most looking forward to this one because this involves a foursome between some very interesting characters.

First there is Mad who we’ve seen the most of over the course of the series. Even then, there isn’t much that we know about him since he’s guarded himself so well. However, when he is in the presence of Dylan, that changes. We see a more playful side to him, a softer and sometimes more intense side. Together Mad and Dylan are explosive but Kit Rocha goes above and beyond that when they bring in two incredible strong-willed women into the mix.

Jade and Scarlet are lovers as well. But neither are afraid of inviting others so when Mad and Dylan enter the picture, that’s really when this book blazes. I had no doubt that Rocha would deliver on the sexiness. It’s what they are good at. Hot, passionate sex has always been such a main feature for these books. But in addition to all that, Rocha is still building their world, creating more avenues for their characters to explore.

That being said, I also think that as more characters are introduced, the easier it is to get lost in this world. Rocha spends some time laying down the groundwork for the next book in the series and while I can appreciate that, I also think it’s funny that such an exclusive group like the O’Kanes can so easily accept others into their midst. Of course I understand that the series needs to go somewhere after the HEAs but I have to say that I’m not that invested in the newbies just yet.

I also want to talk briefly on the tone of these books. As you can expect from the covers and the nature of the dystopian world, they are kind of dark. But I find them to be more emo than truly “dark”. Each character has their own set of worries, their own fears and while they add so much to the love scenes, outside of those moments it can be a little heavy. The books seem to drown in them and I find this especially true for the more recent books in the series. Even after the HEA, no one is truly happy. They may be content, but there is always something haunting that character. I would’ve liked to see some of the camaraderie and the fun times that the first two books had because too much darkness can be too much.

[…] had no doubt that Rocha would deliver on the sexiness. ” ~ Under the Covers Read full review | Purchase on […]

Thanks for the review, this is waiting on my kindle for me.