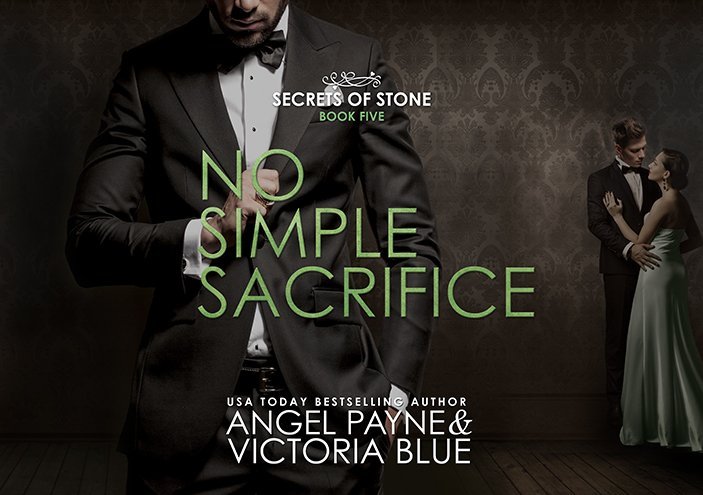 Hello, everyone! Angel Payne and Victoria Blue here, so thrilled to be welcomed back by the sexy girls of UNDER THE COVERS—and with some very special guests of our own—to celebrate a special occasion with you all: Book 5 in our SECRETS OF STONE series, called NO SIMPLE SACRIFICE.

If you’re new to the series, here’s the sexy-and-fast DL on the subject:

–The books are all high-heat contemporary, inspired by our mutual love for twisty-turny plotlines, ala the soap operas and nighttime dramas we grew up with—with a modern twist! (Think All My Children mixed with a flair of modern-day fairytale.)

–The stories are set in Chicago and San Diego.

–Each couple in the series gets 2 books of their own, with the exception of our new trio (oh yeah, we said trio!), who were introduced in the box set called ONE NIGHT IN VEGAS (still available until September ’16—see the buy links below!)

On that note, we’d love for you to get better acquainted with the hot-hot-hot trio at the center of the new book—and we’ve invited them with us, to conduct a little self-guided “interview” of their own for you. Let’s sit back and be some naughty voyeurs for a few minutes…take it away, Drake Newland!

Drake: *Lifts a low, knowing smirk back at Victoria and Angel* Well, hello there, everyone—and thank you, Victoria and Angel, for that awesome introduction. Drake Newland here, one of your heroes featured in No Simple Sacrifice. I suppose my creators would call me “tall, dark, and handsome”, though personally, I don’t see it. (My physical model is Sean O’Pry, who got famous by costarring in Taylor Swift’s Blank Space video.)

I’m hopelessly in love with the gorgeous, sexy, amazing Talia Perizkova—and I really enjoy sharing her with my best friend, Fletcher Ford. Needless to say, I’ve jumped at the chance to ask a few questions of her and Fletch—especially some of those that our sweet girl likes to dodge when I ask her in private.

So come on in here, you two. We have some readers wanting to know a little bit more about us.

Fletcher: *Stares at his friend, curiosity clearly piqued* So…what’s this for, man?

Drake: The “Under The Covers” book blog. I promise they won’t bite—but then, you might like that.

Talia: *Lightly bats Fletcher on the chest while sitting on the sofa next to Fletcher, and eyeing Drake with sultry meaning while he rolls his Desk chair across the room, Stopping when he faces them.* Behave!

Fletcher: Well, this certainly sounds like our kind of blog.

*Everyone chuckles, though Drake quickly shifts to a serious tone. Talia immediately stills when she hears his voice.*

Talia: *Muttering* I was afraid of that.

Drake: I’ll be gentle, I promise.

Fletcher: Well, where’s the fun in that?

Drake: *To Talia* If you’re outside, what are you most likely doing?

Talia: *Twists lips, clearly giving that some thought.* Hmmm. Probably having a picnic in the park. Its something my family did a lot when I was growing up.

Fletcher: *Eyes turning sultry.* A picnic! *Waggles his brows at Drake* Now that’s something we haven’t tried with her yet, brother. Outside, in the crisp clean air…

Drake: Man, do you not remember what Victoria and Angel did for us in this book? You know…the Mexican Riviera…a certain starry night…

Fletcher: *Does a hard face palm* Are you seriously giving them spoilers now?

Talia: Next question! And make it for him this time! *Jabs finger toward Fletcher*

Fletcher: I’m ready. Lob me a good one.

Talia: You’re always ready, but that’s beside the point.

Fletcher: *Nuzzling her ear* If you’re around, then damn straight.

Drake: You two going to get a room?

Talia: Only if we get to invite you too.

Drake: You want your question or not?

Fletcher: Lay it on me, bro.

Drake: When did we start calling each other that?

Fletcher: Pretty much from the start, when we met each other years ago at that god-awful “Successful Young Chicagoans” mixer, or some crap like that.

Drake: Riiight. *Shakes head* God, that was a snore-fest.

Fletcher: We saved each other from the dismal wasteland of small talk and soggy cocktail sandwiches.

Talia: *Quirking lips again* Okay, does Fletch get a question, or not?

Fletcher: *Side-eyes her with a smirk* I’m thinking maybe not. She gets so cute when she’s pissed, doesn’t she, brother?

Drake: I would heartily agree. *Smiles slowly at Talia* I wonder what other ways we can get her riled up.

Fletcher: Well, that would entail getting the afore-mentioned room.

Talia: Actually, that’s sounding like a darn good idea to me too. You two, dressed in those dark suits, gives me some very fun ideas about one of those big hotel suite bathtubs.

As our very lucky little heroine makes her way toward the front desk with her hot and sexy men, we’ll step back into thank everyone in advance for all of your enthusiasm and support for the Secrets of Stone series—and to remind you that Talia, Drake, and Fletcher are featured in NO SIMPLE SACRIFICE, being released on Tuesday, April 26th! We really hope you enjoy it!

If I could turn back time…

You know what they say about wishing for the impossible.

My name is Talia Perizkova, and time is usually my best friend. It’s been good to me in the months since I left the man who nearly wrecked me and I’ve returned the favor by working hard at Stone Global Corp, now getting promoted to lead one of SGC’s key expansion projects.

There’s only one mar on that record. The night I told time to kiss my ass, during a business trip to Vegas with my bosses—yes, my bosses—and experienced a night for the record books with them both. But what happened in the City of Sin refuses to stay there for any of us and time has joined forces with his pal, karma, to exact payback—from the depths of my heart.

The solution, according to them, is simple. One man steps down so two of us are happy.

I could find a way…

But sacrifices are rarely simple and one plus one doesn’t always equal happily ever after. That means the three of us have to decide—take a chance on this rare love we’ve discovered…or give in to fear and lose each other forever?

Publisher's Note: This book has previously been released elsewhere. It has been revised and re-edited for re-release with Totally Bound Publishing. 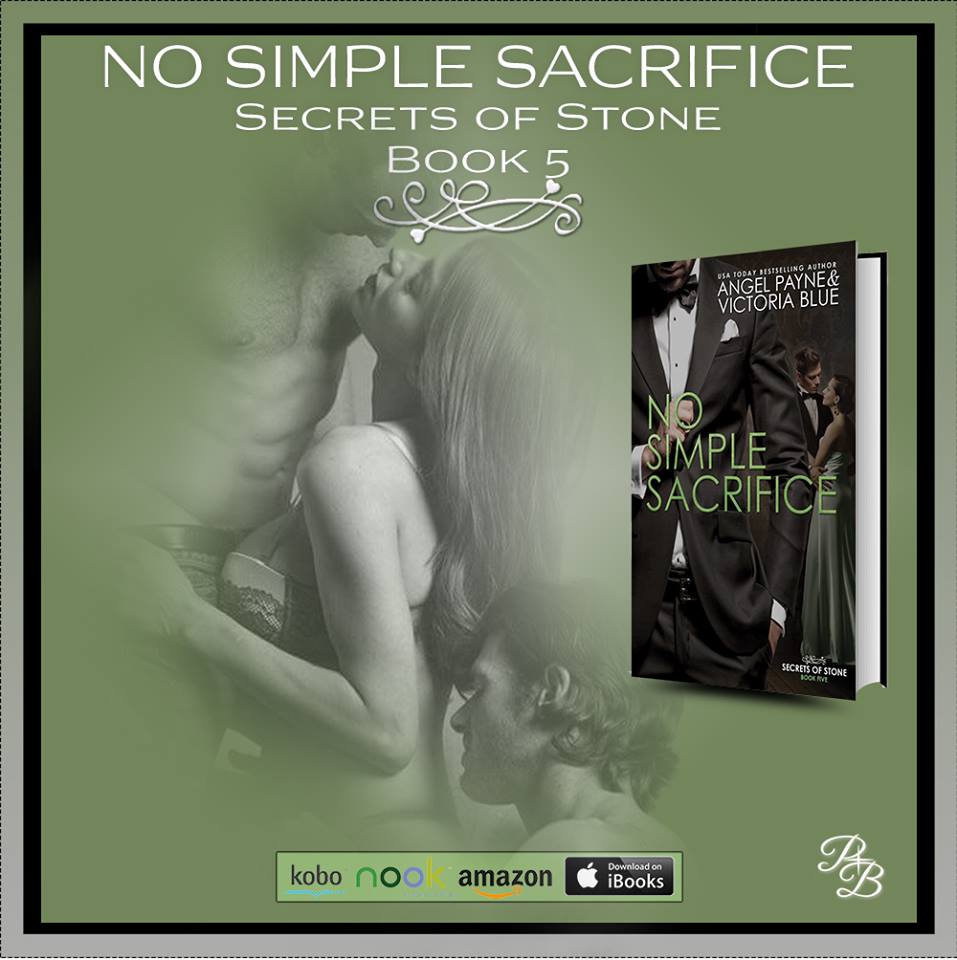 Victoria Blue lives in her own portion of the galaxy known as Southern California. There she finds the love and life sustaining power of one amazing sun, two unique and awe inspiring planets and three indifferent, yet comforting moons. Life is fantastic and challenging and everyday brings new adventures to be discovered. She looks forward to seeing what’s next!

I’m not a fan of soap operas but this trio sounds pretty hot!

Oh they are Elizabeth!!!!