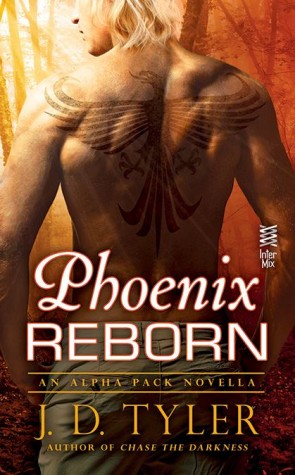 “…we get PHOENIX REBORN.  Which was just too….. simple.”
~ Under the Covers

It is no secret that I’m a fan of this series.  When I first noticed there would be a m/m story as we found out one of the Pack members found his mate in a human nurse at the compound, I was extremely giddy.  Especially because he was rejecting the idea completely and I thought that would make for a good angsty story.

And then we get PHOENIX REBORN.  Which was just too….. simple.  The story, the characters, it just all felt like a waste of a good base for a book!  I started off liking both of them, but quickly realized Nix was going to annoy the crap out of me.  A lot of his issues come from the homophobia he had to deal with from his father.  And I’m sorry, after he’s now turned into a big bad shifter, I can’t get behind his way of thinking.  And after a while, Noah’s actions were also getting on my nerves.  So basically I spent a lot of time while reading this book wanting to shake both characters!

The one thing I did like was the tie in to the phoenix aspect and how the author was able to work that in.  But other than that, this book has left me a bit disappointed.  I’m not sure if I can say the author was comfortable writing a male/male couple.  The dynamics between them didn’t really work for me, and the sex got repetitive.  As always though, this is a series I’ll continue reading, even though sadly this one missed the mark for me.

National Bestselling author J.D. Tyler is best known for her dark, sexy paranormal series Alpha Pack, and the Firefighters of Station Five series under her pseudonym Jo Davis. PRIMAL LAW, the first book in her Alpha Pack series, is the winner of the National Reader’s Choice Award in Paranormal. She's also been a multiple finalist in the Colorado Romance Writers Award of Excellence, a finalist for the Bookseller's Best Award, has captured the HOLT Medallion Award of Merit, and has been two-time nominee for the Australian Romance Readers Award in romantic suspense.

J.D.’s books regularly appear on the Neilson Bookscan, Barnes and Noble, BooksOnBoard, and Amazon bestseller lists, among others, and she was recently named by BooksOnBoard as their #1 Bestselling Romance Author.

When she isn’t writing, J.D.’s idea of a good time certainly isn’t cleaning house (sniff), bungee jumping (not in this lifetime, or the next), or camping (her idea of “roughing it” is a slow bellboy). She enjoys reading, being pampered like the diva she is, and spending time with her awesome family. J.D. lives in Texas with her two teenagers.

It sounded good… I wonder if anyone could tell me why it’s not available in Canada.

We had similar reactions. I don’t think she was up for writing an m/m, either. This one felt off and there were so many chances for a deeper story that weren’t taken. I think it needed to be longer to develop it.

I was so excited about the prospect of these two, that’s what bothered me the most. The potential was all there!

Bummer, I’m on a PNR binge and I love a good M/M story.

The series is really good though

I had so much trouble with the setup of this in previous books that I don’t want to read it. I can’t stand the idea that Nix sees himself as straight but his animal mates to a man. Sorry, no. Your animal should complement your sexuality also you see it, not contradict it. Not a book for me.