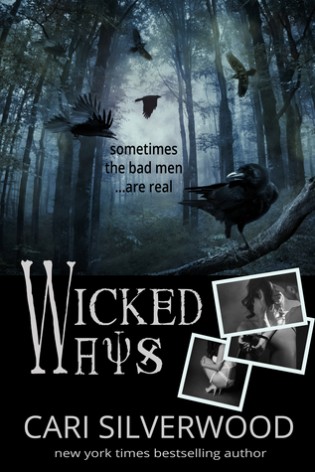 “Kudos to Cari Silverwood for always keeping it fresh and interesting.  I’m hooked once again!”
~ Under the Covers

I’ve been waiting with bated breath for Cari Silverwood to release Wicked Ways, her first installment in a new dark erotica series, Dark Hearts.  Her Pierced Hearts series is one of my top favorites and was so sad to see it come to a conclusion.  The Dark Hearts world is not connected, so no need to read that first, though I absolutely would.   Wicked Ways introduces us to Zoire, an academic professional, who has come under the influence of Reuben, a very bad man with very bad intentions.  He’s a mesmer, able to bend the will of a woman by invading her brain, rendering her incapable of saying no.   To anything.  Reuben has competition by the name of Mister Black.  He may not seem as ruthless and uncaring as Reuben, but he has an agenda all the same, and it includes making Zoire into the perfect weapon.

For sensitive readers out there, this is dark erotica even darker than Cari Silverwood has ventured into before.   Read the warning she posts if you have any reservations.  Reuben has no redeeming qualities, a truly evil man who enjoys using women for sex and money, leaving them a shell of themselves, or worse. Make no mistake, Zoire can’t help but enjoy the orgies that Reuben orchestrates for her degradation.   He body says yes even when her mind is trying to overcome the influence and say no.  I was left enjoying things I knew I should abhor, which is the mindfuck that is Cari Silverwood’s dark erotica.  We become Zoire in a way, captivated like a deer in the headlights.  Mister Black is a mesmer as well and has no qualms exerting his influence over Zoire, but he seems to temper it with a bit of conscience, making him someone I wanted to see Zoire completely surrender to.   The sex is dirty, hot, sometimes in multiples (gang bang style!), and for some, just on the edge of what they can take in a story meant to turn them on.  For me, it skirted that edge deliciously.  I enjoyed the slightly paranormal angle involving mesmers, as it really allows a lot of freedom and possibility to the story.  I can’t forget Grimm, Zoire’s unlikely librarian protector that always seems to show up at the right moment to save the day.  He wants a piece of Zoire too.   I can’t wait to see what type of a character he develops into.  This is a series that will clearly build from book to book, so don’t expect a clean resolution to tie everything together.  Wicked Ways is, without a doubt, one of the more unique and intriguing erotic stories I’ve read in forever.  Kudos to Cari Silverwood for always keeping it fresh and interesting.  I’m hooked once again!

Guest Reviewer at Under the Covers Book Blog
I’m a 30-something medical professional by day and obsessive Crossfitter by night who’s been in love with the written word since I can remember.And that means that I read every Nancy Drew and Nancy Drew Files until I snuck Stephen King’s It from my father’s bookshelf at age 10.I was never the same… I read voraciously for years, until academic pursuits derailed me, but re-entered the fray 8 years ago when a certain teen paranormal series caught my attention.The passion back, I haven’t stopped since.When I’m not working, working out, or traipsing around for my teenage son’s hectic activity schedule, you can find me with Kindle in hand, often until the wee hours of the night.

This sounds really interesting…Thanks for sharing your thoughts Jennifer

Sometimes you need that dark, gritty read. It sounds similar to the Jessica Jones show. I’ve been told that I have to watch that series. I haven’t ventured out of Ms. Silverwood’s Steamwork Chronicles, but maybe I should. At the very least, I should re-read the Steamwork books.

Chris, I said the same thing when I started watching Jessica Jones. Jessica very much a superhero show and is about her defeating the villain, Killgrave, after she’s escaped his clutches. The rapes that happened to her are glossed over. He’s very much a supervillain and goes about killing and destroying many lives. Great show. I really enjoyed it. Mine is about what happens to her while she’s still in his power. The mind powers are less all-powerful. I wanted to explore the dark eroticism, as well as the, “what if she has some resistance to his power, unlike all… Read more »

I hope you didn’t think I was trying to say that there was any copying or trading on popularity. I was just recognizing a small point of commonality. Of course, I hope that commonality works to your favor! 🙂 I’ll have to add your new series to my ever-growing TBR and keep it in mind when someone is looking for a dark read.