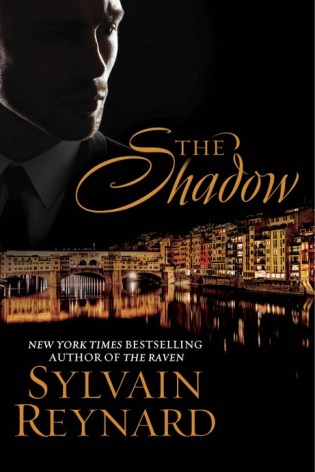 The Shadow
by Sylvain Reynard

“I don’t know whether it’s because it’s only because of the writing style or perhaps these characters don’t hold my interest as much as Reynard’s past characters has. It’s unfortunate because there’s no doubt that the author is eloquent. It just doesn’t hold my attention for long.”
~ Under the Covers

THE SHADOW is the second book in the Florentine series but really, it should actually be considered a continuation series of Gabriel Emerson. While I have no problem knowing that this is a spin off series, my real issue with this series so far is the fact that the author is still grounding this entire series on past characters. I enjoyed Gabriel and his wife but their story has come to a beautiful end. This Florentine series marks a change in several areas of Reynard’s writing. This is supposed to be a paranormal romance series. So I don’t understand why the professor needs to be so heavily involved in everything when his series was a Contemporary Romance. Perhaps if you haven’t read the previous series it would be easier to dismiss the fact that now you have some paranormal creatures interacting with a human throughout the book but I think it defeats the purpose because now fans who enjoyed the Gabriel books may find it more difficult to get on board with what’s happening in here.

Reynard’s writing remains largely the same and while I enjoy it in some areas, his attention to detail is also a double-edged sword. I think I mentioned this in one of Reynard’s earlier books I reviewed. Details are nice but too much can really bog down the pacing of the story. I felt that was the case here. It took me a very long time to get through this book. Something about the writing this time seemed to drone on, causing me to put it down more often than I was flipping the pages. I don’t know whether it’s because it’s only because of the writing style or perhaps these characters don’t hold my interest as much as Reynard’s past characters has. It’s unfortunate because there’s no doubt that the author is eloquent. It just doesn’t hold my attention for long.

“This is supposed to be a paranormal romance series. So I don’t understand why the professor needs to be so heavily involved in everything when his series was a Contemporary Romance.” How does that even work and I’m sure it quite annoying, thanks Annie!

Yeah, that’s why I was getting frustrated with it. This is a new series and I overlooked this in the first book because I thought it would end there but it didn’t unfortunately.