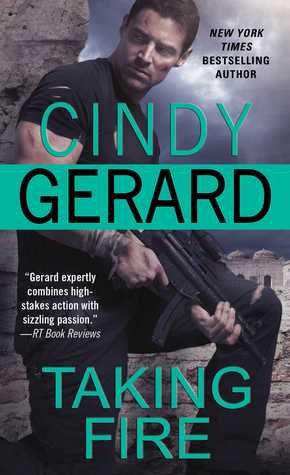 “I loved this book. All of it. TAKING FIRE had me feeling all kinds of emotions I never thought I would’ve in a single book and this once again proves why Cindy Gerard is the queen of Romantic Suspense.”
~ Under the Covers

Readers, if you’re excited about this book, you have a good reason to be. I’ve been a fan of Cindy Gerard for some time now but its books like TAKING FIRE that really make me appreciate how talented an author she is.

When you read the blurb of this book, it doesn’t sound like it will be any different from the other Romantic Suspense stories we’ve encountered before. As a member of the Mossad, Talia obviously puts her own life in danger for the organization she adores. But she never expects that in seducing a hardened warrior to bring her closer to her target that she will fall in love with him in a week.

I thought the set up would be a quick hello-and-goodbye deal because well, that’s really what a lot of other authors would do to be honest. But Gerard surprised me when she took her time, building that romance right from the beginning. Let me tell you, the level of tension between these two is off the charts. In just one chapter, Gerard was able to convey some tension, both the sexual and suspenseful kind but back it up with plenty of emotion.

EMOTION. That’s what this book is filled with. Whether we’re talking fear, anxiety, desire or lust, Gerard goes through the entire rainbow of human emotion to make readers FEEL. What’s so special about this book is that it doesn’t just cover the positive emotions that are often associated with strong romances. Gerard also touches on fear, worry, betrayal. You don’t encounter this often in other series let alone in a single novel. But somehow Gerard has managed to pack them all in here in a believable way.

In diving into this book, I worried that I would not like Talia because of what she does to Bobby but I never felt any ill feelings towards her at all. Even whens he was betraying him. There was something very genuine about her character. And I believed that she thought she was doing the right thing at the time. Even though she used him, we later learn of other events that she did to try and make up for it. Despite their rocky beginning, I absolutely love Talia and Bobby together.

As always, Gerard never fails on delivering in the hot hero department. Oh baby, Taggart is one sexy motherfucker. Even if you aren’t a RS fan, try this series out for its heroes. You’ll definitely want to start collecting them like I have.

I loved this book. All of it. TAKING FIRE had me feeling all kinds of emotions I never thought I would’ve in a single book and this once again proves why Cindy Gerard is the queen of Romantic Suspense.

Oh, yes. You have pimped this to me on Goodreads. I’m glad to see you enjoyed it so much! 🙂

Under the Covers Book Blog
Admin
Reply to  Angie

I’m telling you, you need to read this series!

She is, hands down, my favourite Romantic Suspense author.

YOWZA! I shall be getting this immediately. Thanks, Annie!

Yay! I hope you enjoy this as much as I do!