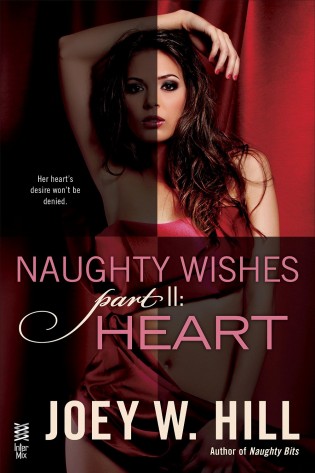 “Hill has always been a master at the dirty and emotional sex scene.”
~ Under the Covers

As you can see from the review, I really loved the opening to this serial.  Part two is longer and we have Chris in the picture, making this into a true menage series it was hinting at.  I love that the characters aren’t all sorted out from the beginning.  Geoff is clearly a Dom, but Chris is more layered and complex.  He isn’t a submissive, that’s clear, but not the alpha Dom that Geoff oozes with ease.  It’s also not apparent if Geoff and Chris have mutual attraction for each other.  That aspect of the relationship has yet to be explored.   True to Joey Hill’s style, this is a more cerebral series, with an emphasis on the budding relationships, the emotions involved, and the sexual action between these three.  We certainly get to see them outside, to temper that intensity, but this is, first and foremost, a series about three people coming together and finding their way.   Hill has always been a master at the dirty and emotional sex scene.  There are times that I long for her more sadistic side, but I still have her amazing Vampire Queen series for that.   Chris finally comes around and we get a taste of what’s to come for these three.  The marker on the back scene…..you’ll have to read to find out what that means, but  trust Joey Hill to never bore you with the cliche.  More conflict is clearly on the horizon and I’m excited most to see how Chris handles it all.  This is shaping up to be a very satisfying serial.