“…an adventure story with a few interesting ideas and a strong heroine…it won’t give you anything new, but it is certainly entertaining. ”
~ Under the Covers

WARNING: This review is mostly full of the ramblings of a confused mind!

Firstlife is the first in Gena Showalter’s new Young Adult series Everlife, which takes a brand new look at what happens after we die. The world as we know it has changed, everyone knows that life on Earth is just your firstlife, what really counts is after you die and you are faced with a choice, which realm do you want to spend your death in? Troika or Myriad. Both realms are vastly different and do their best to recruit as many new souls as possible. Tenley Lockwood is Unsigned, she hasn’t decided which realm she wants to sign her soul up to…hence why her parents sent her to the asylum. Until she signs up, she isn’t to be let out, but she isn’t going to let pressure from anyone decide where she spends her secondlife…even if it means she has to suffer the occasional waterboarding. However, her soul is more important than she can imagine, and both Troika and Myriad will so anything to win her soul.

So, don’t let my bumbling synopsis put you off this book (the official blurb is much better!) this really is an interesting concept to base a book around. Knowing this life is just a warm up for what awaits you after death, and not in an i-have-faith ‘knowing’ kind of way, but it being 100% fact that once you pop your clogs your soul will go to one of these realms for most of eternity. The idea of this book, as well as the awesome cover, are what attracted me to reading YA, a genre I normally ignore/avoid.

Did the book fully capatilise on this idea? I think yes and no. There is clearly a “good” realm and a “bad” realm, although at first it seems as if she is trying to give you a balanced view, with each realm having its own strengths and weaknesses and neither being good or evil, but it quickly became apparent that this wasn’t true. I think I would have preferred it if it wasn’t so clearly cut, but every book needs a conflict and Myriad and Troika are the perfect vehicle for this; however, this also made it pretty obvious the side our heroine was going to choose, almost right from the beginning of the book. However, On the yes side of things, I love the idea of this almost heaven and hell afterlife existence, and I have feeling each realm has its own secrets and I can’t wait to find out what those are.

So, lets get down to the story. First off, Ten our heroine, she’s feisty, a little crazy and incredibly brave, with a mile wide streak of honestly and loyalty. I liked her. She is also very similar to other characters that I have read by Showalter, not necessarily a bad thing, it offered some sense of comfort and familiarity as I read the books, and I am, after all a Showalter fan. Now, we can’t expect to have a story with a 17 year old girl in it and not have some boys thrown in for good measure. Both Troika and Myriad send in an agent to entice Ten on board their soul train. Now, this doesn’t go the way of the love triangle, although maybe that would have spiced it up because the love story in Firstlife is as flat as Coke that has been left out all night; I just didn’t buy it. The steely eyed Ten suddenly goes gaga over a boy after some of her recent torturous experiences and it didn’t compute with me. Maybe if they have overwhelming chemistry… instead I was thoroughly underwhelmed by the bad boy with the bad accent and supposedly gooey lovable centre. It just seemed like Showalter was trying really hard to generate something between them, but it never sparked for me, and I don’t really understand how it sparked for Ten either.

As a whole, I did enjoy this book, it had a few elements that left me shaking my head and I suppose in the end, good idea aside, it was soon overcome by the familiar story pattern of the YA novel; courageous teen vs oppressive regime, so I wouldn’t expect anything new. If you are after an adventure story with a few interesting ideas and a strong heroine, I would give this a try, it won’t give you anything new, but it is certainly entertaining. 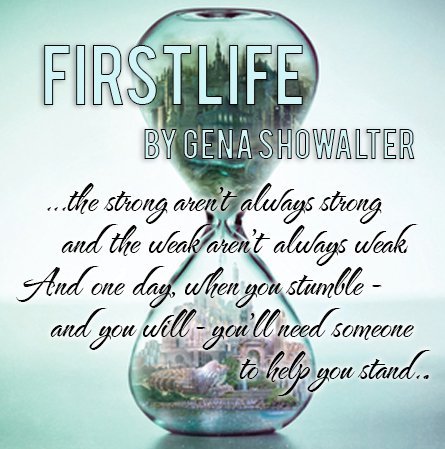 Sounds interesting…thanks Suzanne for the review

Thanks for the review, I don’t read much YA.

You didn’t put the link to the third book in the series.