The Trouble with Temptation
by Shiloh Walker

Love is the greatest risk of all.
After seven days in a coma, Hannah Parker remembers nothing about the accident that landed her in the hospital--or how she ended up pregnant with Brannon's baby, the man she's loved since high school. Her body and heart have burned for him for years, and when she wakes up, he's sleeping by her bedside, anxious to keep her safe at all costs. But as Hannah struggles with her amnesia, a threat looms closer--one that could have deadly consequences if she recovers her memories. She will have to trust Brannon completely if she is to keep what haunts her at bay…and their baby safe….

Brannon McKay spent the last ten years fantasizing about Hannah. In his mind, he's explored every passionate scenario he can think of while, in real life, Brannon took their budding relationship and threw it away with both hands. Hannah doesn't remember what happened but, now that she is awake, Brannon would rather die than watch her walk away again. When Hannah and his unborn child's life is threatened, Brannon must stake claim to the woman who has held his heart captive for years…or risk disaster tearing them apart…

Interview and Giveaway with Roni Loren

Interview and Giveaway with Shayla Black and Lexi Blake

Weekend Highlight: OFF THE CLOCK by Roni Loren

January Book Club Read: WHAT YOU NEED by Lorelei James 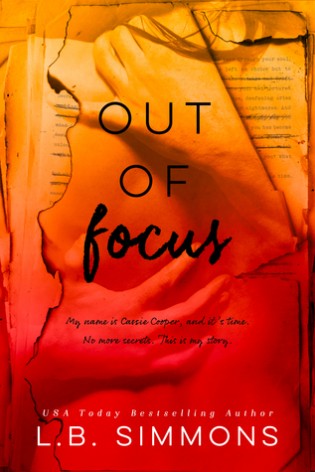 Out of Focus
by L.B. Simmons

Secrets are stubborn things when they refuse to remain hidden. They tear through your soul, clawing and lashing until the pain becomes so unbearable, you’re left no choice but to silently scream your agony. No one hears you, of course. You smile on the outside and drift through life as though your mind is at peace, but all the while, you remain your own tortured prisoner. Sealed inside the darkened, soundproof room of your conscience, deafening cries echo as you plead for someone to unlock the door and release you from your nightmares. And eventually, when no one comes, you find ways to cope. To dull the suffering the only way you know how.

But what happens when you’ve become so numb, when everything around you has become so blurred, that you begin to lose focus on the saving grace standing directly in front of you? When you’ve anesthetized yourself to the point of losing consciousness, forced to watch as his once solid image fades away, lost to your reach in the haze as it smothers you?
What do you do then?

You fight. You heal. Then you bring him back.

Well, my name is Cassie Cooper, and it’s time.
No more secrets.
This is my story.

***WARNING - The subject matter of this novel centers around the psychological effects due to sexual abuse experienced during childhood. For this reason, as well as sexual situations, language, and adult themes, suggested reading age is 17+.***

Brotherhood in Death
by J.D. Robb

Sometimes brotherhood can be another word for conspiracy...

Dennis Mira just had two unpleasant surprises. First he learned that his cousin Edward was secretly meeting with a real estate agent about their late grandfather’s magnificent West Village brownstone, despite the promise they both made to keep it in the family. Then, when he went to the house to confront Edward about it, he got a blunt object to the back of the head.

Luckily Dennis is married to Charlotte Mira, the NYPSD’s top profiler and a good friend of Lieutenant Eve Dallas. When the two arrive on the scene, he explains that the last thing he saw was Edward in a chair, bruised and bloody. When he came to, his cousin was gone. With the mess cleaned up and the security disks removed, there’s nothing left behind but a few traces for forensics to analyze.

As a former lawyer, judge, and senator, Edward Mira mingled with the elite and crossed paths with criminals, making enemies on a regular basis. Like so many politicians, he also made some very close friends behind closed—and locked—doors. But a badge and a billionaire husband can get you into places others can’t go, and Eve intends to shine some light on the dirty deals and dark motives behind the disappearance of a powerful man, the family discord over a multimillion-dollar piece of real estate . . . and a new case that no one saw coming.

A little better this week but I’m still starting the year behind schedule!

I’m buying The Score and I’m on the library waiting list for Off the Clock and What You Need.