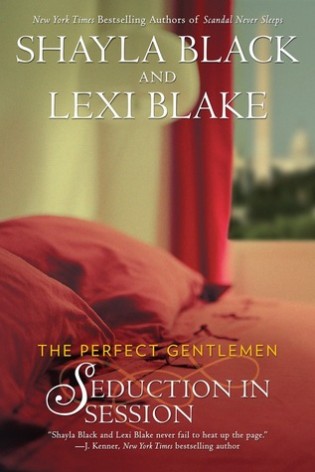 “If you like to solve a mystery and still get plenty of steam, then you’ll want to pick this series up.”
~ Under the Covers

SEDUCTION IN SESSION is the story of Connor Sparks, the only one of the Perfect Gentlemen that doesn’t come from money.  He attended prep school on a scholarship and he’s become sort of the muscle of the group.  A CIA operative and with more blood on his hands than most.  People around Connor die.  He doesn’t have a very high opinion of himself, so when he meets do-gooder Lara Armstrong he knows she’s just too good for him.  But he’s an asshole enough for that not to stop him from taking a bite.

It’s all about appearances and preconceived ideas.  I had an idea about Lara and her blog Capitol Scandals going into this book that was wrong.  It was fun to see the true nature behind the political blogger and to see how far Lara would take a fight for the right cause.  She is an admirable heroine.  Connor is the perfect hero for those that like an unrefined alpha male.  He really has no finesse and a charmer he is not.  But there is something really captivating about the real nature of his persona.  What you see is “almost” what you get.  Except the lies he has to tell Lara about himself.  I really enjoyed these two together, although the pacing of this book went on a bit of a rollercoaster of ups and downs for me.  Sometimes it dragged a bit and sometimes it really kicked it into high gear.

There is something intriguing about the premise of this series that keeps me coming back for more and the authors are executing it quite well.  I am absolutely sold on the conspiracy theory and I can’t wait to see how that web of interconnected events will span out throughout the series.  If you like to solve a mystery and still get plenty of steam, then you’ll want to pick this series up.  It doesn’t lack for clues that are left scattered for the reader to pick up on and it’s guaranteed to have you wanting more.  I have to admit, I’m itching for the President’s book but I am sure his will be the last.  Regardless, I am ready to dive in and explore more.

“You love her.  You want to marry her.  Hey, do you want to double wedding this shit?”

“Take it off I’ll rip it off.  Anything you want to keep better hit the floor in ten seconds or less because that’s how long it’s going to take me to get inside you.”

This series does sound intriguing

Definitely I want to read this series!
Great review Francesca 🙂