Love in the Light
by Laura Kaye

“[Laura Kaye] did a stellar job. I couldn’t be happier with the turnout of Jace and MaKenna’s story.”
~ Under the Covers

I vote Love In The Light by Laura Kaye to be the MOST long-awaited sequel ever! After the release of Hearts of Darkness in 2011, Kaye fans has been hounding her for a follow-up of Caden and MaKenna story. If you’ve read that book, you know that it’s well deserved. It took a long while, but the continuous requests for the next installment paid off. Laura Kaye finally gave in and gave her fans what they wanted. What I wanted.
Caden and MaKenna had gotten to know each other in Heart of Darkness without reservations, but it wasn’t nearly enough time to really tell their story. In Love in the Light, we’ll get to finally know what happened after that extraordinary afternoon. Well, two months past and they have been inseparable, but the time has come for the next step of their relationship…meeting her family. Unfortunately, with Caden’s past of loss and sorrow, meeting Makenna’s family and ex-boyfriend will set off all kinds of emotions that will affect them dearly. Don’t get me wrong, his insecurities and vulnerabilities are justified and relatable. Unfortunately, his armor of tattoos and piercing will not be strong enough to shield him from his fears. He’s going to have to brave it.
I was afraid that the expectations and anticipation have been so high for this book that Kaye might not deliver. I should’ve known better to doubt her ability to come through because she did a stellar job. I couldn’t be happier with the turnout of Jace and MaKenna’s story.

Though there were new characters introduced in this book, I was told that there are no plans to continue this series…at this time. It’s a shame because Makenna’s brothers and even her dad are all very intriguing. Kaye is a busy bee with her Hard Ink Series and a new series called Raven Riders MC which scheduled to release in April. I won’t be surprised if she someday announces book three of this series is in the works. Sooner than later I hope.

“Do you want to get changed and I’ll set dinner out?” Caden asked.

“Yeah,” Makenna said. “Sounds great.” The kitchen, dining area, and living room were one big room, with her bedroom door toward the far end. She paused there and looked back. Caden moved around her little kitchen, comfortably and familiarly, and he just looked so freaking good there. In her space. Well, their space now.

He still had his townhouse in Fairlington, but he rarely slept there anymore. And it was so bare bones in furnishings that he preferred they not sleep there because he feared she’d be uncomfortable. A part of her wasn’t sure why he even kept it at this point.

“What?” he asked, giving her a skeptical look.

She grinned and leaned against the door jamb. “I rode our elevator today.”

He shook his head. “Anything interesting happen?”

“Oh, I got trapped with a smoking hot stranger and made out with him in the dark. The usual,” she said.

He smirked. “That never happens.”

Makenna threw her head back and laughed. Still smiling, she changed into jeans and a pink camisole with a low back, and then she threw a warm, chunky caramel-colored cardigan over that.

She found Caden sitting at the set table, containers of food overflowing with several types of noodles. It smelled amazing—savory and spicy and like she could eat everything she saw.

For a moment, the look on his face made her think he was upset about something, but then he saw her and his expression transformed into a sexy smirk. “Smoking hot, huh?”

Laughing, she took the seat next to him. “You fishing for compliments, Grayson? I already said you were freaking gorgeous.”

“Yeah, but that’s not the same as smoking hot.” He arched a brow, and damn if his playfully smug, expectant expression wasn’t hot as hell with his brow piercing and the widow’s peak of his dark hair.

She picked up her fork. “Okay, then how about this? You are so freaking gorgeous and so smoking hot that you make my heart race and my mouth water and my panties melt. Every time I see you. How’s that for a compliment?”

Caden’s smile was slow coming but so damn sexy. “I like tattoo night.”

She laughed and shook her head. “So do I.” 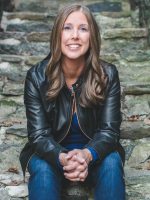 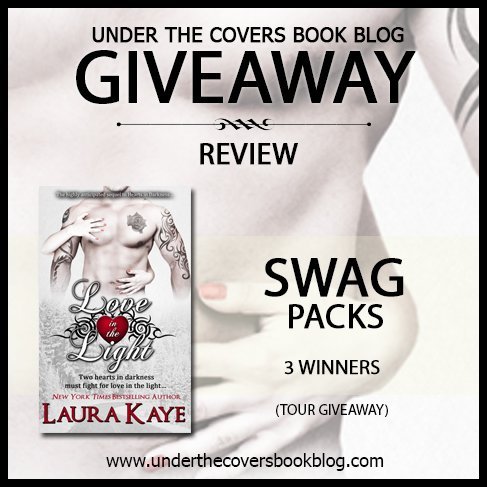 Sounds good…Thanks Angela for the review

I am so glad Laura Kaye wrote the sequel. I have been waiting for Love in the Light. I loved Hearts in Darkness.

I loved this book.