SHILOH AND THE BRICK

“I’m not talking to him,” Shiloh said, her eyes bleeding scarlet, her pupils dilating vamp-black.

I just laughed, the sound a little catty, a little mean, and shook my head. “Take the phone before he answers or I’ll stick you under my arm and carry you to Vamp HQ and watch him convince you. It won’t be pretty.”

Shiloh ripped the cell out of my hand and said, “What?” A moment later she scowled and added, “Sir. What, sir?” She turned away and hunched her shoulders. I smiled at Molly and her husband Evan. It was a fake smile but it was all I had left, and it was nicer than the one I had shown Shiloh.

Molly’s niece had disappeared at age fifteen, a runaway. That same year, she had reappeared in New Orleans, in a teen shelter, just in time to be swept up by the Damours, witch-vampires who were looking for witch-children to use in black-magic, blood-magic sacrifices for a big-assed spell to … never mind. It’s convoluted. But I could still feel the chill in my bones from the day I discovered she had been taken. Soon after, Shiloh had been turned and used by vamps to accomplish their own ends.

Except for running away to New Orleans—and look how badly that gone—Shiloh had never made a single decision in her own life. She had lived every moment at the behest of others. Witches had abandoned the girl. Vamps had used and abused her.

All that made me want to let her go, let her make this one decision for her own life, let her face the consequences on her own. If she was the only one to face repercussions, I’d likely let her go. But that wasn’t going to happen. If Shiloh Everhart Stone let a witch-working explode, or bit a tourist, or, God help us, both, it would create major reverberations throughout the witch and vamp worlds. The whole country might face the results with her. And there wasn’t enough of me to protect everyone. 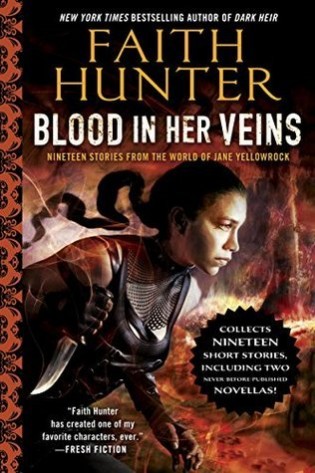 Blood In Her Veins: Nineteen Stories From the World of Jane Yellowrock
by Faith Hunter

In this must-have collection of stories, experience nineteen thrilling adventures from the world of vampire-hunter Jane Yellowrock, including many fan favorites and two all-new novellas. Read about the first time Jane put the pedal to the metal in “The Early Years,” and the last thing a werewolf will ever see as Jane delivers justice in “Beneath a Bloody Moon.” Get a searing look into the pasts of some of the series’ best-loved characters: Beast in “WeSa and the Lumber King,” Rick LaFleur in “Cat Tats,” and Molly Everhart Trueblood in “Haints.”

In the brand-new “Cat Fight,” the witches and vampires of Bayou, Oiseau, are at war over a magical talisman—and Jane must figure out how to keep the mysterious artifact out of the covetous hands of the Master of New Orleans. And in the never-before-published “Bound No More,” Jane welcomes a visit from Molly and her daughter, Angie, who is about to prove she’s the most powerful witch in Everhart history....

From the Big Easy to the bad bayou, from the open road to a vampire’s lair—with Jane Yellowrock, it’s always a given: have stakes, will travel.

Brute slammed into his legs, sending Rick stumbling to the side. The were wolf started that horrible, low-pitched growl, the one that made the hair stand up on Rick’s arms. Rick stared at the handle. There was nothing there, nothing visual anyway. He bent and sniffed, but smelled nothing except his own scent. He looked at the wolf, who was staring at the door, head down, slightly hunched, as if he was going to pounce. “Someone went into my quarters?”

Brute nodded, dropping his head once.

Rick ran through the scenarios. He wasn’t allowed to carry his sidearm on campus. None of them were—they weren’t on duty, they were in school—so going in alone would be stupid. But if he called for help and no one was in there,
he’d look like an idiot. So . . . He took a slow breath and let it out. “Let’s be stupid and see what this is.” Rick stood to the side of his door, his back against the wall, and turned the knob slowly. Opened it an inch and sniffed.

Brute stuffed his snout inside and sniffed too. After a moment, his ruff settled and he looked up at Rick. 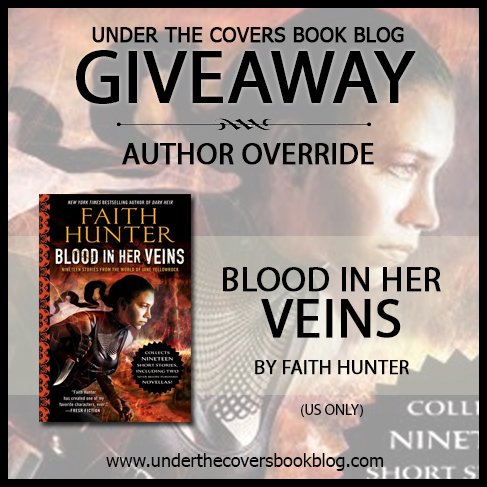 SECOND GIVEAWAY!
Faith Hunter has a $25 Starbucks gift card for ONE commenter who comments on all the blogs who’re hosting the story parts. Blog tour schedule is here

Nice! Part two of the blog tour short story AND an excerpt from one of the new novellas.

The excerpt is from Golden Delicious, where Rick goes for his PSYLED training.

Poor Ricky-bo can’t even go to school without getting into trouble.

Love faith hunter and can’t wait to read this!

I’ve never read Faith Hunter, thanks for the post. I do enjoy urban fantasy so I might have to check this out.

I haven’t checked today, but the first book in the series was $1.99 on Kindle over the weekend.

Loving this short story so far – interesting to see where it leads. It’s hard for Jane to get tough with kids but she’s capable! Shared, G+’d and Tweeted!

Love this series!!! thanks for sharing!

Thank you for sharing 🙂

Sorry I see it’s us only and i am international !

I haven’t read any of the short stories based on the Jane Yellowrock series. Will definitely catch this collection.

Love it! As usual, Jane is thinking about what’s best for everyone. I can’t wait for the next part, and can’t wait to read Blood in Her Veins!

Agree with Jane, rather face many challenges other than teenager (s).

I am a faithful follower of Faith Hunter and love watching the evolution!

Another new series for me…thanks!

Love this series. I can’t wait for each one.

Love Jane and the whole Yellowrock Crew. Can’t get enough!

Another series on my must read to do list.

I’m going back through, to make sure I haven’t missed a thing! JY is a great series!