He smelled like Shaw and tasted like Casey, thanks to Abby’s cookies. I found myself burrowing deeper inside the crook of his neck, desperate for more of the delicious aroma emitting from his body like some addictive form of untried confectionary. My fingers latched on to the strands of his hair and I didn’t want to let go, despite the conflicting emotions oscillating through me at this new, yet disturbing, concept.

I should have stopped, but my legs only tightened further around his waist as Shaw propelled us down the hall to an unknown destination. And I realized it didn’t matter where he was going as long as I got to go along with him. He was everything familiar. And I really needed familiar right then.

My God, but his cock was a raging bulge pressed to the core of me. One that couldn’t and wouldn’t be ignored. And all I could think about was how badly I wanted to taste the salty hint of his flesh, feel the heavy weight of him on my tongue, and lick him from root to tip.

I’d already begun to plot out how I was going to make that happen when Shaw crossed the threshold to a room—his room, I assumed—and kicked the door shut with the heel of his shoe. And then my back was slammed against the wall.

My protest was cut off when his hand covered my mouth. Shaw brought his face inches from mine and I could do nothing but lose myself inside the blue heat of his eyes.

“Shut up.” His words were clipped and edgy, but the pulse of his arousal continued to demonstrate how turned on he was. And my mouth watered at the thought of taking his length and sucking him. Hard.

When I made no attempt to struggle out of his tight hold, his fingers squeezed my cheeks before relaxing back against my face.

Without lessening his grip, Shaw leaned forward and nuzzled the side of my neck. The softness of his lips moved across my skin and my eyelids drifted close. I was trapped—entangled by my own lust and his overwhelming presence. Until his teeth clamped down on the sensitive flesh of my neck. It infuriated me, both because I liked it and because he knew it. Not only that, but his hand over my mouth was preventing me from being able to put his cock there.

Besides, this was my house, dammit, and everyone knew the house ruled. If it was a fight he wanted, it was a fight he was going to get. So I grabbed a good handful of his hair while prying his hand away. Finally my mouth was free, though the snarl to Shaw’s lip meant he wasn’t happy about it and likely wouldn’t allow it to go on for long. My mission was only half complete, as I still needed to get his cock in my mouth, so I had to act fast.

I fisted another handful of hair to keep him in place, while releasing the hold my legs had around his waist so I could drop to the floor. Shaw wasn’t having it. He kept me pinned to the wall with his body, a sexy yet annoying smirk on his face even as he continued to pull against the hold I had on his hair. At any moment, I expected him to break free, with or without his mane intact.

“Let me go,” I ordered, bucking against him and kicking my legs back and forth to jar myself loose.

“Then we’re going to do this my way.”

With a quick move that caught me off guard, Shaw released me to the floor, catching me with one arm around my waist until I was firmly planted on my feet. And then he pinned me again. “Whatever I want to do.”

There was a wicked gleam to his eye and something told me I’d just played right into his hands. Well, we’d see about that.

“We’re not doing anything until you tell me what you’re doing here.” I wasn’t sure my words carried very much weight, what with them sounding all breathy and just plain flimsy. Though his lips and teeth had returned to my neck, so I passed the blame for my mousiness on to them. Not only that, but Shaw was moving lower and lower, his mouth closing around the nipple he’d managed to find even though he couldn’t see it through the sweater . . . and cami . . . and bra. But he didn’t stop there. No, he took the position I’d wanted. I would’ve hated him for it if it hadn’t been for the added perk I knew would be mine.

“That makes zero sense, seeing as I’m already doing it. Why haven’t you ever worn these things before?” Shaw was on his knees before me, studying my leggings. I could feel each warm exhale of breath on my center when he nuzzled the tight space between my thighs with his nose.

I closed my eyes, trying to concentrate, and then I asked the question again, “What are you doing here, Matthews?”

The undeniably hot, wet stroke of his tongue when he licked me through those stupid, beautiful leggings was my undoing. My knees buckled from the sensation, but Shaw was there to pin me back in place. Working me with his full mouth, he buried his head and moved back and forth with each deep sweep of his tongue until his teeth scraped my clit, sending a jolt of “something wicked this way comes” through me. The description wasn’t far off the mark; the orgasm already building was definitely evil in nature.

Shaw pulled back then—only slightly—giving me a reprieve I was sure was more for his benefit than mine. He didn’t even look at me, but he did finally answer, “Tasting you. What are you doing here?”

He didn’t wait for an answer, which was just as well. I had lost all ability to form a coherent thought, much less the ability to string words together and make a logical response. Instead, I drowned in sensation as his strong, capable hands moved across my hips and then over my thighs before circling around my back. There, he cupped my backside, kneading my bottom and molding my flesh under his large palms like a piece of malleable clay.

When I felt his fingers seize and the curl under the waistband of my pants, all the air rushed out of my lungs. I glanced down my body as every nerve ending went on high alert. Shaw, on his knees, was a sight to behold. As he began to lower my pants, the tendons in his arms were taut with the rigid control he always kept in check but hovered just below the surface. You could practically feel his strained urgency pulsate between us with a life force of its own.

His movements were maddeningly slow, deliberate even as he stopped short of pulling the thin scrap of material over my hips.

I grabbed the stupid leggings to give them a shove, but Shaw flexed against my hold, not allowing me any control. Damn him. His jaw ticked and nostrils flared, though I wasn’t really sure what he had to be so mad about. He was the one causing the delay. Maybe the control he’d refused me was only barely contained within himself.

“Not until you answer the question.” He nuzzled me again, making it impossible for me to think clearly.

I tried to focus, I really did, but the soft kiss along the seam of those godforsaken leggings wasn’t helping matters.

Shaw released a heavy breath. “You ran.” His fingertips pressed into my flesh with his tightened grip. “Why?”

He yanked my pants down. “Me.”

With that one clipped word, Shaw clutched the rolled leggings at my thighs and pulled me toward him. 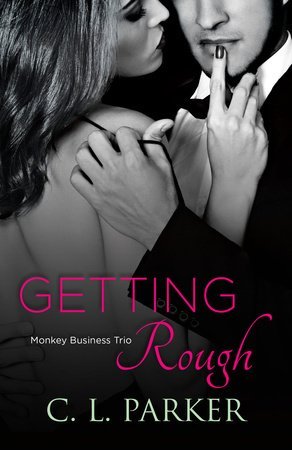 Getting Rough
by C.L. Parker

The next sizzling novel of C. L. Parker’s Monkey Business Trio—perfect for fans of Bared to You and Beautiful Bastard

Hotshot San Diego sports agent Shaw Matthews and his sexy professional adversary Cassidy Whalen have gone head-to-head in the boardroom—and the bedroom. Now Shaw has scored a big promotion—but only because Cassidy turned it down and ran off. There are many things he wants when it comes to Cassidy—just not her pity. So Shaw rushes to a small town in Maine to retrieve his dignity—and maybe the woman he’s hungry to claim once more.

Cassidy has pushed herself to the max to realize her career dreams—until a family crisis brings her home. But Shaw isn’t letting Cassidy go that easily. Neither is gorgeous heartthrob Casey Michaels, the childhood sweetheart she left behind—and who now wants to win her back. As the rivalry between the two alpha males intensifies, and Shaw’s seductive moves reach a whole new level of heat, Cassidy has to make a choice. And this time, it’s for the highest stakes of all.

Getting Rough is intended for mature audiences.

Join the Facebook Release Party for GETTING ROUGH, lots of fun and contests!

Thanks for the post, not a fan of triangles.