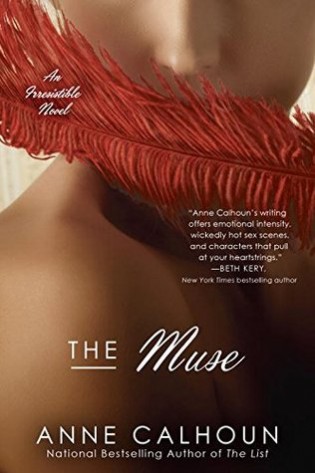 The Muse
by Anne Calhoun

“I enjoyed THE MUSE but it’s probably not my favorite from this author.”
~ Under the Covers

As of late, Anne Calhoun’s have been a hit or miss for me. The last book in the series was a miss but while it took me awhile to warm up to THE MUSE, I ended up liking it in the end. Calhoun has a special way of approaching her stories. She takes quite mundane occupations and kind of glamourizes them with her characters. In this case, we have Seth who is a bike messenger. But he also models nude on the side. He has quite the interesting past. He was in the Corps and is dealing with survivor’s guilt when an IED explosion killed his best friend.

He meets Arden MacCarren at one of her drawing classes, after her family undergoes some public scrutiny when her family investment house fails. To be honest, I didn’t care about the scandal part of the story. For one, readers don’t know Arden’s father or Charles and the evident already happened at the start of the book so there was no emotional attachment to what she was going through.

However, I did enjoy the romance that Seth and Arden have. It runs along the same lines as Calhoun’s other books – sleek and sexy, that’s the best way I can describe them. They definitely have that big city feel, accompanied by that taint of loneliness that comes with living in a large city.

There are some shy and awkward moments between the two but I found that it ran a little bit more subtle in this one. The emotion is still there but maybe it’s because Arden is so closed off that it doesn’t have the same intense heat as some of Calhoun’s previous works do. I enjoyed THE MUSE but it’s probably not my favorite from this author.

After doing time at Fortune 500 companies on both coasts, I found myself living in the suburbs of a small Midwestern city. The glamour of various cube farm jobs had worn off, so I gave up making a decent living to take Joseph Campbell’s advice and follow my bliss: writing romance.