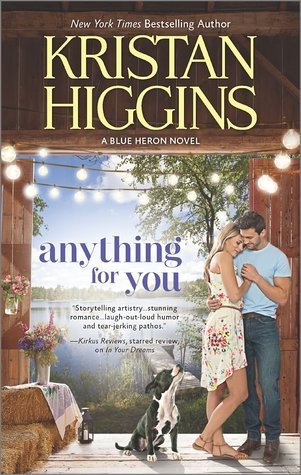 Anything for You
by Kristan Higgins

“She writes the stories that no other author would ever dare. And that’s what makes Higgins stand out and make her books worth the read.”
~ Under the Covers

Connor O’Rourke is ready to take that next step in life so he has the ring, he has the special night all planned out. But when he pops the question to his long-time girlfriend, Jessica Dunn. She flat outs says no.

But it’s clear that this isn’t the first time that they have gone over this. In fact, their on-again, off-again relationship has been something that these two have been dealing with for some time. I had to give Kristan Higgins some credit. You don’t often see these kind of relationships often so I love the fact that she decided to write about it. However, I do understand why they aren’t so popular with readers. The conflict is quite weak and a lot of it stems from the fact that there’s a lack of communication, the one thing that absolutely irritates me about conflict in Contemporaries.

I liked Connor right off the bat but Jessica was a little more harder to handle. She has her own set of responsibilities that she must deal with, but it’s at the cost of her own happiness. I actually don’t think she minds caring for her brother, but she uses it as an excuse with Connor and I wasn’t a fan of that.

A lot of the book is set in the past. It goes over the tumultuous ride of Connor and Jessica’s relationship and as you can expect, the failed proposal is the not first time Connor has wished they could take that next step into life together. When Jessica breaks things off, Connor tries to move on, going on several dates that absolutely killed me. While Higgins’ trademark humor is still very much present, there’s also an emotional punch in this book as well so you can expect some laughter and some tears.

While not my favorite in the series, or my favorite of Higgins’ books, I do think that she writes the stories that no other author would ever dare. And that’s what makes Higgins stand out and make her books worth the read. 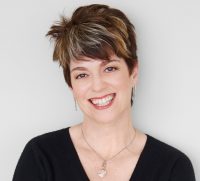 Kristan Higgins is a New York Times, USA Today, Wall Street Journal, and Publishers Weekly bestselling American author of contemporary romance and women's fiction. She is a three-time winner of Romance Writers of America's RITA Award and a five-time nominee for the Kirkus Prize for Best Work of Fiction.

I have read all of the Blue Heron books so I plan to read this one. Thanks for the review!

I will read anything Kristan writes! I have read the rest of this series, and so far, the first book (The Best Man) was my favorite. I really liked the heroine in that one. Thanks for the honest review!

Under the Covers Book Blog
Reply to  Sharlene Wegner

She def writes some amazing books!