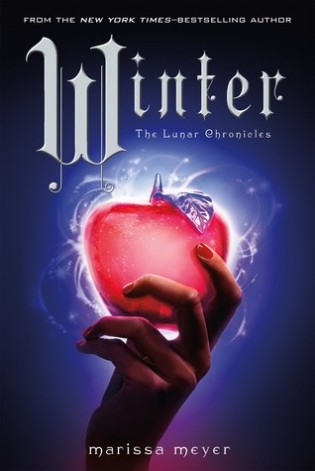 “WINTER was a terrific read that kept me entranced. These characters are so magnetic that you can’t help but love them.”
~ Under the Covers

Winter is the princess of Luna and she’s also batshit crazy. I want to say it’s all due to the fact that she stepmother is Queen Levana but it’s also because she has withheld her ability control people and it’s taking a toll on her. Going into this story, I wasn’t sure how I was going to love her character. In the last book, she certainly seemed more crazy but something happens when Jacin and Winter are together. She almost calms down a bit and I was surprised by Jacin’s tenderness with her. It was a side we’d never seen from him before. Their romance was one of my favorite parts of the book. However, once the action really started rolling, I felt like Jacin and Winter were pushed to the background a little bit. I was also hoping for something bigger for them at the very end.

The end has come but I’m actually happy about it. This series was more than a rollercoaster ride for me. There were more than just crazy highs and lows, but also plenty of backtracking as well. That was one of my pet peeves with the last book but I think I came in with the right kind of mindset with this one. I knew that Meyer wouldn’t go the easy or the most efficient route and that she would like take several steps back once any of the characters made their move. I feel like once you’ve seen it before, it’s easy to get immune to it so having the several setbacks didn’t bother me as much in this one. However, it didn’t stop me from rewriting certain scenes in my head to make it flow a little better. I just can’t seem to help it.

The resolution, when it came, worked but I also thought that there would be a greater sense of satisfaction. I got the Thorne moment I was waiting for, the moment when he would realize that Cress was too good for him but that he wanted her anyways. I really enjoyed that scene but as for the Cinder and Kai and Jacin and Winter, I was expecting a little bit more. Especially after what Cinder and Kai have gone through.

I also would have loved to seen more with Kinney and Iko. There were some sparks there and I think that would make for a lovely story if Meyer decided to write something extra for them.

Nevertheless, WINTER was a terrific read that kept me entranced. These characters are so magnetic that you can’t help but love them. I have my favorites but choosing between them is hard. It’s been a long time since I cared about a group of characters as much as I do with this one and I have no doubt that I’ll be remembering them for years to come. The Lunar Chronicles is definitely my favorite series this year.

“Despite everything, she still looked like perfection, at least to him.”

Soooo i was supposed to get cinder this weekend but that fell through….trying again next weekend!

I hope you give it a shot soon!!

Hope so too. WOuldn’t want you to miss out on such a great series!

Thanks for the review, I’m adding this to my TBR pile.