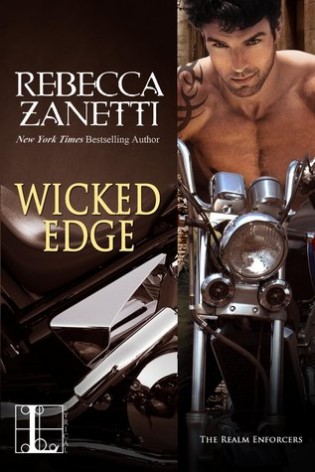 “Wicked Edge is not Zanetti’s best work but overall an enjoyable read.”
~ Under the Covers

This second installment of the Realm Enforcers is about Daire Dunne. Just like his brother Kellach, Daire is an enforcer for the Coven 9. They continue working undercover for Titans of Fire MC in attempts to find out the source of the new drug that’s killing witches. While working, he meets Ceecee whom he cannot stay away from no matter how much of a loose cannon she is.

Ceecee, much like Daire is just as determined to catch the bad guys but Ceecee has ulterior motives…revenge. The man who has done her loved one wrong has it coming to him and it is well overdue. She will stop at nothing to achieve it even if it means getting away from the man she wants to be with.

While I enjoyed this book, I will admit that I had a hard time rating it. Rebecca Zanetti continues to deliver an action packed story full of sexy witches and shifters. Daire is the sweetest, protective alpha hero you could ask for but unfortunately, I can’t say the same about the heroine. Ceecee is a strong, independent heroine who had her mind set on doing things…her way. Unfortunately, some of her decisions involved drugging Daire repeatedly, and I just could not agree with it.  She thought she was doing him a favor but resulted in her needing the help instead.   For the life of me, I can’t understand why he kept falling for her tricks. Her decisions annoyed me and she bordered TSTL. I will admit that she redeemed herself in the end. I think the most important thing is that Daire forgives her. She’s very lucky to have him.

Wicked Edge is not Zanetti’s best work but overall an enjoyable read. I’m hoping the next book will be about the sexy bear shifter.

Thanks Angela I’ll be avoiding this one

I enjoyed this far more than you did, Angela, as you know. I thought it was funny the way CeeCee thought that drugging Daire would actually work after the first time. Because it brought some naïvety to CeeCee that was really not on the surface. I hope you’ll enjoy the next installment in this series more, though 🙂
Have a terrific Thursday.

I know! I couldn’t get over it. after the second time. LOL I still will continue with the series because the world is still good. thanks for passing by. ~Ang

Fun fact about this photo. My next door neighbor's