From New York Times bestselling author Alice Clayton, the first in a brand-new romance series telling the humorously sexy tale of Roxie, a private chef who gets a taste of love—but is it to stay, or to go?

After losing almost all of her clients in one fell swoop following an accident involving whipped cream, private chef to Hollywood’s elite Roxie Callahan gets a call from her flighty mother, saying she’s needed home in upstate New York to run the family diner. Once she’s back in the Hudson Valley, local organic farmer Leo delivers Roxie a lovely bunch of walnuts, and soon sparks—and clothing—begin to fly. Leo believes that everything worth doing is worth doing slowly…and how! But will Roxie stay upstate, or will the lure of West Coast redemption tempt her back to Tinseltown?

Tully Makker is a tough young woman from the wrong side of the tracks and she is not always easy to like. But if Tully gives friendship and loyalty, she gives them for good, and she forms an enduring bond with Jennifer and Julie, schoolfriends from very different backgrounds.

As they grow into the world of the seventies and eighties, the lives of the three best friends are changed forever by two young men, Robin and Jack, and a tragedy which engulfs them all.

Against the odds, Tully emerges into young womanhood, marriage and a career. At last Tully Makker has life under control. And then life strikes back in the most unexpected way of all…

On the outside, Dina Demille is the epitome of normal. She runs a quaint Victorian Bed and Breakfast in a small Texas town, owns a Shih Tzu named Beast, and is a perfect neighbor, whose biggest problem should be what to serve her guests for breakfast. But Dina is…different: Her broom is a deadly weapon; her Inn is magic and thinks for itself. Meant to be a lodging for otherworldly visitors, the only permanent guest is a retired Galactic aristocrat who can’t leave the grounds because she’s responsible for the deaths of millions and someone might shoot her on sight. Under the circumstances, “normal” is a bit of a stretch for Dina.

And now, something with wicked claws and deepwater teeth has begun to hunt at night….Feeling responsible for her neighbors, Dina decides to get involved. Before long, she has to juggle dealing with the annoyingly attractive, ex-military, new neighbor, Sean Evans—an alpha-strain werewolf—and the equally arresting cosmic vampire soldier, Arland, while trying to keep her inn and its guests safe. But the enemy she’s facing is unlike anything she’s ever encountered before. It’s smart, vicious, and lethal, and putting herself between this creature and her neighbors might just cost her everything. 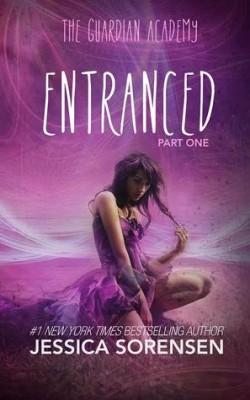 Alana Avery’s life is far from normal. Most of her family are Keepers, warriors chosen to protect the human race, and for as long as she can remember, she has been training to become a Keeper herself. So when she’s chosen to be a Guardian, investigators who solve paranormal crimes and murders, her life changes in an instant.

Alana has to attend Guardian Academy to train for her new role as a Guardian investigator. There, she meets Jaxon Gray, her new partner who happens to be a werewolf. Jaxon is smart, cocky, sexy, and drives Alana absolutely crazy.

Despite Alana’s confliction with Jaxon, her training and new life seem to be going well. That is until her grandfather is murdered.

Alana is determined to track down who killed her grandfather, even if it means getting help from Jaxon. But as she digs deeper into the case, she discovers there might be more to her family and the academy than meets the eye.

(A spin-off novella series from the Fallen Star Series about Gemma and Alex’s daughter, but the Guardian Academy Series can be read on it’s own.)

HIS TO KEEP
Out of Uniform # 1.5
by Katee Robert

He’s always wanted her. Now’s his chance to claim what’s his.

School teacher Marceline Bellini gave up everything—men, sex, anything resembling a social life—to raise her young daughter. To be the perfect parent. But when she attends an engagement party in her standard stick-in-the-mud mode, her friends begin plying Marcy with shots. Just enough to convince her that a little fun doesn’t sound like a bad idea… and having some naughty fun is an even better one.

Like finding herself deliciously pressed against a dark alley wall by the very familiar and very hot body of her best friend’s older brother.

After years of waiting in painful silence, police officer Aaron Robinson finally has Marcy’s attention. And man, does he have it. But nothing could have prepared either of them for the rush of fiery lust between them. So he’ll just have to convince Marcy he’s for real. And that a rainy, lust-fuelled romp is the first step to a lifetime of completely imperfecthappiness…

THE REST FALLS AWAY
Gardella Vampires #1
by Colleen Gleason

Vampires have always lived among them, quietly attacking unsuspecting debutantes and dandified lords as well as hackney drivers and Bond Street milliners. If not for the vampire slayers of the Gardella family, these immortal creatures would have long ago taken control of the world.

In every generation, a Gardella is called to accept the family legacy, and this time, Victoria Gardella Grantworth is chosen, on the eve of her debut, to carry the stake. But as she moves between the crush of ballrooms and dangerous moonlit streets, Victoria’s heart is torn between London’s most eligible bachelor, the Marquess of Rockley, and her dark, dangerous duty.

And when she comes face-to-face with the most powerful vampire in history, Victoria must ultimately make a choice between duty and love.