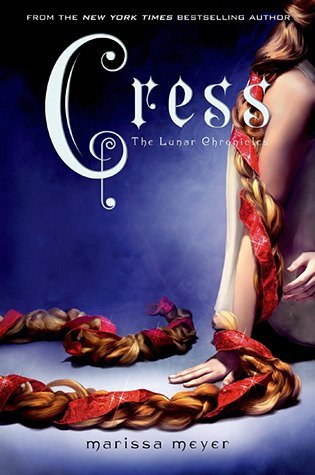 “While the ride was far from smooth, I still find myself fascinated by this world. I’m just hoping the next book will be easier on my heart. But I doubt it. That’s what makes the books so good.”
~ Under the Covers

WARNING: This review addresses some plot advancements in the story that may be considered spoilers! Read at your own risk!

CRESS was the book that I was most looking forward to. Captain Carswell Thorne stole my heart the moment he asked Cinder if they were having a moment in the last book. There’s something about these charismatic charmer types that appeal to me but though I thought I had Thorne all figured out from what we’ve seen in the last book, Meyer does reveal some interesting tidbits about him in CRESS that changed my opinion of him. I still adore him, but he doesn’t seem so shiny and pretty anymore. He’s more REAL and I can appreciate that.

Cress has been locked in a satellite for seven years alone. She only has the company of her programmed ten-year-old self to keep her from going mad. As a result, she’s quite naïve in the beginning and everything is so breathtakingly new to her. I really loved her character. From the very beginning, I almost felt protective of her. Ss terrible things happened to her again and again, it killed me to see her so scared. However, I think out of all the girls so far, Cress shows the most growth. In the short time since she came to Earth, Cress displays miraculous strength and courage and despite Thorne’s blindness, I think he can see that in her.

Their romance is probably just up to par with Wolf and Scarlet’s as my favorite. While Wolf is more dark and passionate, Thorne is more light in his seduction. Both types drive me absolutely wild so I enjoyed every step of blooming romance between Cress and Thorne. I still would’ve liked a more dramatic “I love you” moment from Thorne though. I think after everything Cress has done for him, and the amount of battering her heart had taken in this journey so far, she deserves a man who will get down on his knees and let her know how much he cares for her.

CRESS is brimming with action and suspense. So many times I found myself freaking out while I read this book. When you feel so much for the characters, it’s easy to get lost in the story. However, towards the end, there were a numerous instances where I think Meyer employs the same writing tactics that worked in some cases but seemed unnecessary and annoying in others.

For example, with such a large group of characters communication is key. However, when for most of the book the characters are separated, the lack of communication between them becomes an issue that arises in the books several times. In some cases, it works. Like the scene where Cress unknowingly walks into Wolf’s room and believes she is trouble when Jacin and the Dr. arrive. This works because once Thorne arrives, it’s a moment of relief, of humor and it’s a small triumph for the group. I loved seeing this.

However, Meyer uses this lack of communication tactic to the extreme and once you see it used already, it becomes very, very easy to spot it when it’s coming again. I HATED the part when Kai and Cinder argue about what’s the right thing to do. Not only does it completely erase all the progress she’s made in terms of the romance so far, but it really breaks up the fast past of the story. The scene went on for too long and rehashed unresolved conflicts too much. I felt the same when the Dr. and Thorne where in the medical wing, trying to get his eyesight back. The Dr. has SO MANY chances to tell Thorne about Cress and also about his discoveries about the plague but he didn’t. Meyer likes to do this thing where the readers know secrets but some of the other characters don’t so every time the character withholds valuable information from another, it gets very frustrating for the reader. I can handle it when it happens once or twice, but when it becomes the driving force of the story? Yeah no. I don’t like it. Meyer needed to find a different way to pull genuine reactions from her readers. I’m worried that with WINTER being 800 pages long, she’ll do the same and I’m not sure I can handle it so I’m a little hesitant to jump in right away.

After everything that had happened, there was one question that nagged me. With all the advanced technology and gang’s ability to infiltrate the palace to stop the wedding from happening, how come no one ever tried contacting Kai? Surely if Cinder thought that he would go with her, it would be easier if he knew what was going to happen. Since they knew where he was going to be, wouldn’t it be wise to let him in on the plan? It would avoid the scene that I hated so much and probably made the escape plan more easier. But I guess if you enjoyed the constant triumphs and lows then its fine but I would’ve liked to see the ending cut down a bit. It dragged on for way too long.

Nevertheless, CRESS is still my favorite of the series. So much happens and yet I am looking for more. While the ride was far from smooth, I still find myself fascinated by this world. I’m just hoping the next book will be easier on my heart. But I doubt it. That’s what makes the books so good.

I’ve enjoyed your review on this series and plan to read them sometime.

I adore this series and can’t wait to see what you think of it! I hope you love the characters as much as I do, Amy!

I have so enjoyed the whole series, and am saving my pennies for Winter

WINTER might be my favourite book yet! No, that’s a tough call. I do love this book a whole lot too.

I hope to buy book 1 this weekend

I cannot wait to hear your thoughts on this, Elizabeth!